Christmas Eve and a poem

Posted by Larry Johnson on July 15 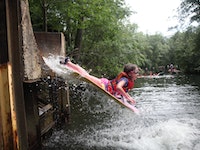 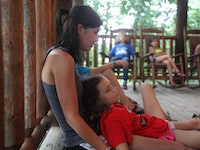 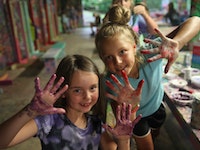 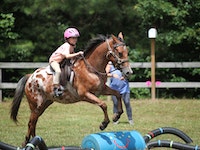 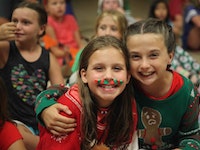 Well howdy parents and an early “Merry Christmas (in July) to ya!! You know it’s just never to early to wish someone a Merry Christmas, We’ve been saying it up here all week long (although it does feel a little strange when its 87 degrees outside). We haven’t let the heat stop us from having that Christmas spirit as everyones cabins are all decorated with wrapping paper, lights and bows as we get ready to celebrate “Christmas in July” tomorrow morning.

All the campers were singing Christmas songs at their meals and in their classes today and even when Mother nature caused a little delay in our activities this afternoon, it didn’t dampen the Christmas spirit of our campers one little bit.

Tonight we had our Christmas Eve celebration and the campers went from place to place (in groups by their cabins) and every location had all sorts of different celebration activities like milk and cookies, making a Christmas bracelet, Christmas charades, and even a station where they write letters to the senior citizens of Mentone wishing them a happy Christmas in July. These letters will be sent to our local “Seniors Center” and they love getting the letters from the girls and just think its the best thing in the world to hear someone wish them a Merry Christmas in the middle of summer. The girls love the idea of writing a letter to make someone’s day, especially with the fact they don’t even know who will be reading their letter, but they still can make a big impact on someone and thats the really cool part.

Tomorrow our campers will wake to the sounds of our horseback staff riding around camp waking everyone up to the yells of (you guessed it….) “Merry Christmas!!” after everyone gets up and while still wearing their PJ’s, makes their way to the gym where Santa will stop by and give each camper and counselor their gift. Sarah Kate will then have everyone gather around her up in front of the gym and read the first Christmas story to everyone so they will hear the real reason for the season.

Now about this time everyone realizes we haven’t had breakfast yet and so its off to the dining hall for our breakfast of home made doughnuts with fruit, eggs, bagels, bacon and more. Later in the morning we’ll have Sunday School and then our Christmas church service in the gym and then its getting ready for our big carnival after rest hour. we’ll have all sorts of inflatables and games, face painting, sno cones, and even a giant dunk tank for our counselors and club leaders to get in and see who can drop ‘em in the tank of water.

After all this its picnic dinner on the grounds and then counselor hunt where all the campers will be looking for the counselors that are decked out in their best camo and hiding from the campers around camp. The club that has the most campers find counselors will win some big points towards the “Point Cup” thats awarded at the end of the session. We’ll let ya know how it goes.

Well, its kinda become a tradition every year to have our night before Christmas poem, so here goes another try this year. Hope you guys enjoy it and be sure to send your camper a “Merry Christmas” email for them to have tomorrow!!

The night before Christmas…Camp style!

T’was the night before Christmas and all across the camp,

The humidity was so high, everyone’s clothes were all damp

The campers were snug and asleep in their bunks,

while all of their stockings hung from their trunks.

Sally and I had just just gone to sleep,

the campers were quiet, not even a “peep”.

When all of a sudden there arose such a clatter,

I jumped to the widow to see “whats the matter”.

When what to my sleepy eyes should appear,

but Saint Nick himself and all of his deer.

The first thought in my head as I ran down the hall,

was “one of those bucks, will look good on my wall!!”

But then I noticed his sleigh full of toys,

seemed to be packed for girls, nothing for boys.

He saw me watching and turned with a jerk,

but then smiled and nodded, and went back to work.

He went to all the cabins with toys in his sack.

Then Driftwood and Joywood covering all of Hut row,

from cabin to cabin, I watched him quietly go.

He didn’t use the door, just somehow got in,

Then off to the Lodge starting with Rosey Den.

he was wearing a fur coat and it wasn’t even chilly.

Then across the river and back to his job,

but not before taking a little time, to play on the blob.

he delivered the gifts to all of Summerplace,

You could see he was jolly, by the smile on his face.

And last on the list was of course Riverside,

for the oldest campers, and all their club pride.

He didn’t miss a room, as he delivered their surprise,

They were so sleepy from activities, none opened their eyes.

Then back to his sleigh he loaded his sack,

he must be in shape, I’d have thrown out my back.

I heard him exclaim as he flew above the pines,

Merry Christmas to all from Camp Skyline!!

Have a great night!