Posted by Larry Johnson on July 16 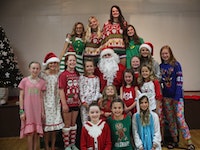 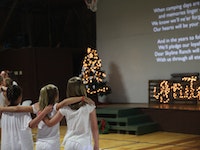 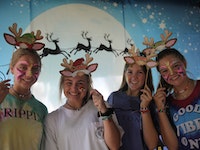 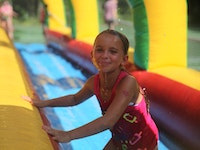 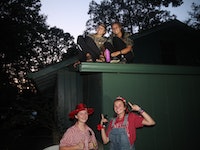 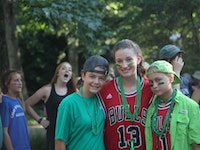 Merry Christmas “in July” to ya parents!!! It has been a great Christmas day here on the mountain as all the campers awoke this morning to our horse staff riding through camp on horseback wishing everyone a “Merry Christmas” to wake them up.Not to mention Santa was leading the pack as he helped wake up campers all around camp.

From there it was straight to the gym to open presents and see what Santa brought everyone and for all the counselors to finally find out who their secret Santa was. Of course Santa made his arrival in “camp” style riding up on his 4X4 side by side with the bed of it loaded with presents for all the campers. All the campers were excited when they sow what they got and then many of ‘em made their way up to Santa on the stage for their very own photo op. It was great, no lines to wait in like at the mall!!! After everyone open their presents Sarah Kate read the very first Christmas story to everyone so they could hear it was actually about the birth of Jesus and how he came to Earth to take mans place for all our sins and not all the glitz, glitter and decorations they see in all the stores. From there it was oft breakfast of homemade doughnuts and then back to cabin clean up before Sunday School and our Christmas service in the gym.

Now after that busy of a morning, it was time to get a special Christmas lunch and boy! Did our kitchen staff deliver!! Our lunch today was sliced turkey with dressing, mashed potatoes, green beans, cranberry sauce, rolls and a giant Christmas cake for desert. so…. how was your lunch today?

After all that food for lunch everyone needed a little time to rest and let their food settle before the carnival our in camp. It must have worked, ‘cause when those campers came back from rest hour, they went straight to the activities in the gym like karaoke, face painting, giant Jinga, bracelet making, coloring Christmas scenes, pin the tail on the donkey and many more. Now I know what you’re thinking, “wow, thats a LOT of games”, well folks, that was only inside the gym. Outside we had a dunk tank where the Riversiders took turns sitting on the hot seat waiting to hear the ball hit the target and send them to the watery pool below, giant inflatables, corn hole games, football toss and every camper got a sno-cone of their choice. Between al the different colored smiles and teeth from the sno cones, you could tell everyone really enjoyed that area of the carnival.

Tonight after our picnic dinner on the grounds all the campers partnered up and headed to the other side of the river while the counselors put on their best camo and tried their best to hide form all the campers that came searching for them. I gotta tell ya, no matter how well they hid, those campers left no stone unturned as they looked around every tree and behind every bush till they found almost everyone of them. Those campers ran their own search and recovery mission and ran it to a tee being relentless and never giving up till they had what they came for. Oh yea, I almost forgot to mention. Why were your campers being going through the entire camp like this? Because when they found a counselor they took them back to the gym and found out how many club points each one was worth and the club that found the most campers by the end of the night was the counselor hunt champion and earned some mega points towards that ever coveted point cup thats awarded at the end go the session. When it was all over and done for, the winning club was…………… can you hear the drum roll in your head again?……………….. Toopers!!!. Congrats girls and way to go!!

Tomorrow will be another busy day here at camp and out away from camp. 60 of our campers will be traveling to the white water of the Ocoee River and enjoy a fun filled white water rapid rippin’ time as they ride down the cold water. We’ll have some pics of them challenging the rapids but it won’t be till later in the day but we’ll get those to you just as soon as we can.

The rest of the campers will enjoy fewer people here in line so that means more rides down the zip line or on circus, waterslide or on their favorite horse. Its the best win-win you could ask for. We’ll be out there shooting all the campers (you know…with a camera of course……..I don’t even think campers are in season now anyway) for you folks at home so you can see all the fun they’re having as we start our second week of camp.

You guys at home are half way there and you’re doing great. Keep up the good work and be sure not to stay up too late looking through all these pics (yes, I know there are still some of y’all out there that look for their shoe, ear, back of head and anything else you can find). We’ll get around to as many as we can and try to give ya some good pics so you can rest easy.

You guys have a great night, I’ll see ya back here tomorrow