Day 4- Get Skyline Back

Posted by Larry Johnson on July 12 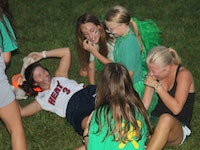 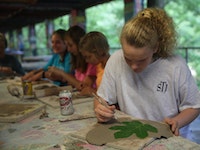 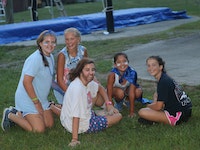 A happy and blurry eyed day 4 to ya parents. Now when I say the campers have been busy, I DO MEAN busy!!!! You can tell they’ve had an action filled and busy 3 previous days, ‘cause today, right after rest hour, I was called down to the riflery range because the counselor forgot her keys to open the gun safe (thats another story for another time) and I got there I told them I wasn’t sure if I had my keys or not, 2 campers cheered and said “lets have a free period so we can go back to sleep……we’re tired!!!!” In the end, I did have my keys and everyone was still happy to get to shoot during the period but there probably wouldn’t have been many objections if I suggested that we all keep taking a nap!

You can start to see it in their faces that they’ve been hitting on all cylinders for the last 4 days and all that running and cheering is starting to take its toll. But whats even more amazing is the fact that when we ring the bell to start the next activity, they somehow recharge their batteries and are all ready to hit the next activity full speed ahead. Honestly parents, if I knew how they did that I would bottle it and put Red Bull out of business. If anyone out there reading this has a way to bottle “youth” you just give me a call and we’ll start planning our retirement!!

Today the mountain biking classes made their way to the Mountain Wedding Chapel a few miles from camp. Its a neat little ride along the banks of Little River and they all love to stop in there and see if they can catch someone getting hitched. That may start to explain the reason they’re so tired, it is a little ways to the Chapel and they go there and back in one period.

Now even though they’re spending all this energy, would you believe the campers on the ropes course were scurrying up those poles like they worked for Alabama Power or something. There’s some good pics of them making their way from element to element and when they get to a pole/station, they have a choice to make about which route they want to continue on. Some are easy and some or more challenging and rewarding when they finish. We like to tell them when they’re through that the ropes course is like life. Full of choices with different paths and outcomes depending on which path they choose at that moment. You see a lot of campers start to challenge themselves with the harder elements by the end of the session and its a great feeling to see them accomplish something they thought was impossible at the beginning of the session. Of course none of this would even be possible without the encouragement and support of their other campers and friends and thats one of the lessons they’re learning all while just “playing” on the ropes course.

Same is true for horseback, canoeing and many other activities, these girls have been here 4 days now and you can see their comfortable here and really starting to work harder at what ever they’re doing and you can see the progress they make each and every day. I know you’re gonna be surprised when you see them at the end of the session.

Tonight we had our “Get Skyline Back’ activity where the counselors dressed up as those ‘ole stinky boys from Camp Laney and came into the dining hall at the end of dinner and captured the club leaders and flags. Now folks, you know good and well, your campers just ain’t gonna stand for something like that to happen without putting up a fight and just as soon as they finished desert (you can’t go on a rescue mission on an empty stomach!!) they headed out on their club colors and set out to recapture their leaders and club flags. All they had to do was get 4 campers around the legs of each of the Laney boys (our counselors) without being hit by a stuffed sock the “boys” were using to defend themselves. Just try to picture all the girls here at camp on a mission, running, diving, screaming, and continually counting down to “Charge!!!” the counselors all night. It happened and your campers were relentless in their pursuit of the boys that took their leaders. Some of those club leaders had those girls all planned out and attacking the counselors from 3 different directions (a classic move) and they took it to ‘em. The counselors put up a valiant effort, but they were no match for the wave after wave of campers seeking justice and their club leaders!! All the clubs did a great job of getting their leaders and flags back, but at the end of the night the results were ………………………… (can you hear that drum roll in your head?………..I thought you could……..) Troopers 3rd, Rangers 2nd and the Mighty Mounties 1st!!! Way to go girls.

Now theres no doubt all that your campers (and VERY soon, this blog writer) are fast asleep and sawing some logs (yes, I’m pretty sure even the campers snore sometimes). Getting ready for another fast paced, fun filled, fantastic, fabulous full day (I really should have saved that line for Friday, know what I mean??). I know I’m, …..um…. I mean….. your campers, will be glad to slow things down a little bit tomorrow night with the camper favorite Mission Impossible. I’ll go into more detail about it tomorrow, ‘cause to tell ya the truth, I’m starting to think those 2 campers at riflery today were wise beyond their years!! So off to bed to get some rest and they up early tomorrow to go again with all the activities and fun. You guys at home are startin’ to look a little tired too if ya ask me, maybe you should listen to your campers and take a little nap yourself. You know you guys have been up pretty late the last 4 night too and we still have a LONG way to go!

Y’all have a good one, ‘cause like a slow kid in Dodgeball………… I’m outta here!