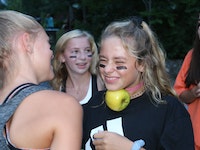 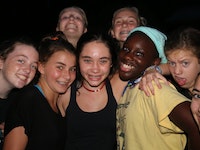 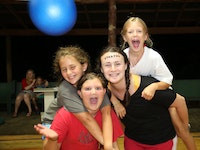 Hello parents and welcome back to todays blog. I’m happy to report that there were no shark sightings at any of the meals today and all the ACIT’s still have all their hands and fingers! (i.e. we didn’t have the chocolate chip squares for deSSert tonight). I hope everyone could appreciate the video of the frenzy from last night. I’ve showed it to several campers and they all busted out laughing when they saw it (I’m pretty sure some of you guys at home did too!).

It was a wild day up here as everyone was enjoying 3rd period, I was out at horseback about to get some video for todays highlights. The sun was shinning, it was hot, everyone was busy in their classes when in about 5 seconds, the sky grew darker and the wind picked up. My first thought was “that breeze feels good” then I heard over my radio that the swimming class (on the other side of camp) was reporting to rainy day activity. “Why are they doing that?” I wondered and started to get my camera out…….. Then all of a sudden, the bottom fell out like I’ve never seen before. No lightening and thunder, but bucket after bucket of rain (and I mean BIG rain drops) fell like a tropical storm. If theres ever been a time when someone could say the bottom fell out, this was it! All the campers tried to run to cover from the rain, but unless you were already inside, not was too late! So…… what to do. No matter how quickly you were heading for your activity rain day location, you were already soaked. It was awesome!! Just look at tonights video and see for yourself how your campers handled the situation. Id say they made the best out of the cards they were dealt for what was happening. Never a dull moment up here!!

After the rain stopped it was time for lunch and for the rest of the afternoon activities, it was cooler and partly sunny so they all went on without a hitch. And to tell ya the truth, tonights activity of Mission Impossible, the temperature was pretty cool and felt perfect to let everyone enjoy a little relief form the heat.

Speaking of Mission Impossible, this is where the cabins all start on theater side of camp and have to try to solve clues to find spout which location they have to go to to accomplish a (silly) task to get their next clue. Now they can’t just go from location to location cause lurking all around camp was a bunch of bounty hunters that were just looking for anything that was moving to inspect. As they see a group of “possible campers” moving, they yell out “bounty haunter sees you!!”. The camper have to hunker down and pretend to be boulders and not move while the counselors inspect them for movement. One group of counselors was using a “whoopee cushion” and the campers couldn’t help themselves from laughing (wonder why?), The best part was when one of the camper said, “they’re using a balloon to make funny noises!!” Here’s another perfect example of good old fashioned fun without the help of a iPhone or App for entertainment. If a camper was found to be moving, they had to report to jail where their cabin would eventually show up and help them “Jailbreak” out (I think its part of the “No Camper Left Behind act of 1998?).

Once they got to their next location they had to accomplish a crazy task to get their next clue and be on their way across camp again looking out for the bounty hunters.

I’m sure they’re all getting a good nights rest now as they prepare for the big dance tomorrow night with the boys from Camp Laney. We’ll be there to get all the pics for ya and let you see who your camper is dancing with.

Well folks, I’d love to stay and continue this late night chat, but with the forecast of more heavy rain tomorrow morning, I have to head down to the waterfront and make sure that everything is stored away and its a lot easier to do it now (even though its dark) than in the rain tomorrow. You guys know the drill, check out the pics, but don’t stay up too late. You’re almost halfway there and you don’t want to start getting tired already!!