Posted by Larry Johnson on July 14 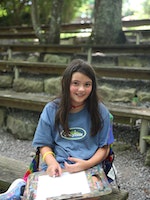 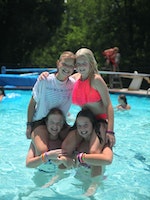 A loud and neon RAVE hello to ya parents!! Yea, it was a wild time tonight as we hosted the boys from Camp Laney to our dance tonight and the theme was “RAVE”. Now I know you guys are gonna find this a little hard to believe, but to tell ya the truth, I ain’t never been to a RAVE dance before. (and I’m not sure if I’m jumping in line to go to another one either!!). But our campers loved it and they all had a great time dancing around in the wildest neon colors complete with glow sticks and glasses and all sorts of wild assortments to go along with their outfits. To be honest (again) it probably was one of the more “festive” dances we’ve had and everyone really did dance the whole night! I would have preferred a little more George Strait music (ok…..ANY George Strait music would have been good for me…..) but then again, I wasn’t the one dancing so the music was fine.

The day started off like the rest of the days, with plenty of sun and fun while everyone was in their activities and playing all around camp. We did have a shower or two during the day but wouldn’t ya know it, one came right during rest hour (talk about some good sleep???? rain hitting the tin roof? yea…thats what I‘m talking about!) and the other came when we were supposed to have our second Beli Deli so everyone went in the gym and we went back to an game everyone loves called “Simon Says”. Its just like regular Simon Says but with a twist, its a fast paced version with all sorts of quick “trick” questions. I think the counselors enjoy trying to win more than the campers but somehow they never do.

When the rain stopped, it was time to go to 5th period so no one missed even one class today due to the weather. Now during that first rain shower we had (remember, during rest hour) something happened that I want to tell ya about. Usually I write about all the campers in the blog so you guys at home will know what they’re doing while they’re here at camp. But this time I want to tell ya about some of their counselors, you know, the young ladies that are in charge of taking care of your daughters and modeling what hopefully the campers want to grow into one day.

Like I mentioned before, the rain came during rest hour and I was out working by the ropes course when the bottom fell out, I ran into the ropes course equipment shed to get out of the rain when all of a sudden, something caught my eye out at the circus area. There were 2 (maybe 3?) counselors running that direction, through the heavy rain to grab all the circus belts and lines and everything else that was out and put it under a large tarp to keep it dry. Now remember, these counselors were in rest hour so these ladies were dry, in their cabin, probably getting some rest when they ran into the rain to do this. Why were they doing this and getting soaking wet you may ask. Because if everything had gotten wet, we would have had to hang it all up to dry and the next circus class would not have been able to go up in the air and play during their circus period. They ran into the rain to put it all up so the campers wouldn’t miss their next circus class. I’m really proud to say, THESE are the ladies in charge watching and leading your campers. They have no idea I was even there watching them or that I’m writing about them tonight (we’ll see if any of them read my blog!!). But whether they read to or not, I’m proud to call them Skyline Counselors, leading by example.

Well, after watching everyone dance all night, I’m a little tired myself so I think I’m gonna callout a night and head to bed. You guys have a good night and don’t forget, Saturday is Christmas Eve here in 3rd session (Christmas in July) so everyone is getting a little excited about Christmas being only a few days away. We’ll have all sorts of Christmas eve news tomorrow so be sure to check back and see what Santa’s gonna bring to everyone here at camp!!

Y’all have a good night, you’re almost half way there and you’re doing great keeping up with all the pics and videos. Now don’t stay up too late and get plenty of rest, We have a busy weekend ahead and you’re gonna need it!!