Posted by Larry Johnson on July 03 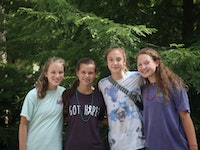 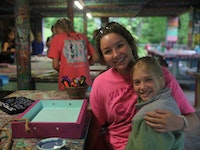 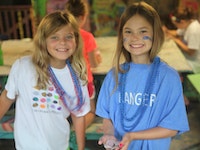 A wide eyed and happy pre 4th of July to ya parents!! (of course you and I both know by the time I finish typing this tonight it will already be the 4th so its not that early!!) What a great day we’ve had up here on the mountain! Ive been fortunate enough to be “forced” into doing the filming today so that let me get around to a lot more classes and see more of the campers in action. And what action it was, be sure to check out tonights video so you can get a “first person view” of what the campers get to see as they’re working through their activities. They were flying al through the air and down the waterslide all day long. By later in the day, I gotta tell ya, that water slide looked pretty inviting but unfortunately I didn’t have on the right attire so maybe it will happen later this session?

Our campers that went on the Ocoee River rafting trip all came back safely and man, did they look tired. When I asked one camper about the trip, she said it was a blast but she was worn out from all the paddling they had to do to navigate the rapids. I’m pretty sure she was telling the truth, she looked completely worn out but still managed a big smile about the trip.

Some of y’all may have some future ceramic pottery makers (I’m sorry, I just don’t know the term for that profession) in your families, I got to see some of the projects they’ve been working on as they put them in the kiln and I was surprised at how good they looked, Can’t wait to see the finished product when its done with the heat.

Mother Nature must have a personal vendetta against 6th period class, for the 2nd day in a row, she decided to drop some rain on us then and it made everyone go to their rainy day locations again, but you know what….. her timing was impeccable for our night time activity. The rain had stopped, but it did leave everything wet on the sports field and thats exactly where we were heading and all dressed in bathing suits or clothes we could get wet in. Tonight we had our Sponge battle where each of the clubs competed for bragging rights and some points for the point cup as they threw water balloons, wet sponges, water soaked nerf footballs and anything else they could find at each other as they tried to get the most water in their pitcher without letting a member from another club knock their pitcher over. Of course there was a big slip and slide out in the middle of the field and several counselors with hoses supplying extra water for everyone that needed it. If ya think its easy to describe something like that, well……. it ain’t. So if your still confused, the only advice I can give ya is to watch the video or look at the pics and see for your self. Its about as easy as herding cats!

Tomorrow we’ll celebrate the birthday of the greatest country in the world by waking our campers up with the staff from the horse barn riding through camp early in the morning yelling “The British are coming!! this will get everyone up and out of their bunks and ready for a special day here at camp. After breakfast we’ll get ready for our 4th of July parade complete with “floats” from every cabin and even our nurses will get into the act and join in. They’re such good sports about our activities. In the afternoon, we’re gonna bring back an old tradition thats been mothballed for several years and take all the campers to the pool and have our 4th of July swim meet. Its sure to be a winner with everyone getting in the water to race and cool off at the same time. Now as if that wasn’t enough, tomorrow night were gonna have the wildest wackiest set of relay races you’ve never herd of. Its called Speed Challenge and we’ll run the races by age group. Each group only has to run one race, but it has 10 parts! Each relay will start on the outside of a giant circle and they’ll run into the middle to complete the challenge and then run back out. As soon s they get back to the outside of the circle, the next set of campers for the next challenge will run in and do theirs and so forth until all 10 challenges are complete……When one age group finishes their set of challenges, we’ll run the race or the next age group and do it again and again….5 times!! Yea, its that wild. Of course it wouldn’t be as exciting unless I told ya about some of their challenges. When they get to the middle of the circle, they’ll have to cover one of their teammates in shaving cream and run back, or get everyone in the middle and wrap the whole group in toilet paper until it comes off the roll, 4 person push up, wet sponge over the head- then between the legs is another one, and of course one of the best is the piggy back relay. I know it sounds easy and we all know what it looks like, but theres just something about the campers having to change partners when they get to the middle that always results in the horse falling down and tumbling in the grass on the way back that just cracks me up. I’ll try to get a video of it tomorrow so you can see it for yourself!

We’ll, its been a long and exciting day up here on the mountain, your campers are fast asleep (some of ‘em were volunteering for that even before we went to campfire tonight) and I’m not too far behind them so I’m gonna let you guys go and look at the rest of the pics and video and then get ready to celebrate America tomorrow wherever you are. I know where gonna give her a great celebration up here and I hope you guys do the same. Have a safe and happy 4th of July and God Bless America!!

Have a good one, its time to catch some shut eye. We’ll see ya tomorrow night!