Get Skyline back and Shark attack

Posted by Larry Johnson on July 26 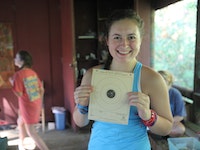 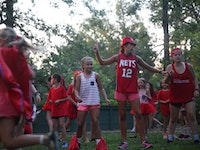 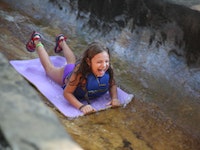 Helloooo parents and welcome back to tonights version of Camp news! It was another warm day up here and somehow all the campers didn’t let the heat keep them from slowing down one little bit. They were taking advantage of all the water fountains and coolers around camp and I’m pretty sure the Frio’s pops at Beli Deli helped keep everyone active throughout the day. One advantage of a warmer day is the circus class (which is normally out in the sun) moved everything into the gym and was teaching their 4th period class how to perform “5 People on a bicycle” act. I’m not sure if Isabel got any pictures of it but if not, I’ll make sure she gets out there later this week to catch the action. Anyway, the campers were doing really well and you could see them studying every part as they got their steps down to make sure they were stepping on the bike at the same time to help keep the balance. Did I mention the bike was being ridden and moving at the same time? Yea…They’re working on some really tough tricks and we’ll have more info for you on their progress later in the week.

As I sit here tonight trying to think of all the things that happened at camp today and how to best describe them to ya, my mind is mysteriously blank. Maybe its the end of the summer, maybe its the warm days. Maybe, just maybe I’ve reached that point where I’m drifting aimlessly in an estrogen ocean. Folks that can be dangerous when its shark week!!

If you don’t believe me just read last nights blog where I tried to describe what its like in the dining hall when they bring out the desserts. If you think I was making it up just watch and see what happened tonight when they brought out the chocolate chip squares. This wasn’t scripted or rehearsed. I just happen to have my phone with me and capture the action as it happened. This is why you NEVER FEED the animals…..

Now as soon as I had that posted, one of the girls in the office pointed out to me that I misspelled the word “desserts” (I only used 1 “s”). they pointed out that the correct spelling of desserts is actually “stressed” backwards. Well there ya have it…… How am I supposed to know how to spell a word backwards if I never get to enjoy the forward spelling version? Did you see that video? do you think there were any “deSSerts” left behind? Those chocolate chip squares stood less of a chance of surviving than a tired seal trying to get back to the shore off the Great Barrier Reef!!! Know what I mean??

Talking about not being streSSed, as I walked through camp today I made my way to the arts and crafts building where the pottery class was working on their projects. It was cool, shady, and they were just sitting there carefully taking care of every detail of their projects. putting lines where they needed to be, making sure the paint was just right before they go into the kiln. It was like sitting back and listening to the waves roll in on the beach. (minus the worry of sharks). I think I may need to spend a little more time down there with those campers as the session goes on.

The Mini Campers are really learning what to do in all their classes. They’re riding the horses like a bunch of pros looking better every day. In archery, they’re all really starting to get their groupings closer and closer. Some are even hitting the target! Just kidding they’re doing great!

Tonight as we (actually “THEY”) all enjoyed dinner and deSSerts (post feeding frenzy) the doors to the dining hall burst open and in came counselors that all looked like they were for the boys camp (or at least they smelled that way). They came in and took our club leaders and flags and kidknapped them out into camp. Now your campers aren’t gonna stand for that and just as soon as they finished devouring their deSSerts (you knew they weren’t gonna leave them behind!) they all headed out on a mission to recover their beloved leaders and club flags. The counselors put up a heck of a fight but (remeber the video) how do you defend something as ferocious as those campers? They came after the counselors wave after wave until all the leaders and flags were returned safely to their rightful clubs. And at the end of the night the winning club was……..the MOUNTIES!!! Way to go girls well done, now go get yourselves some more chocolate chip squares! (deSSerts)…You earned it.

Well tomorrow night is Mission impossible and I’ll get all that info to ya tomorrow so you can see what all the crazy pictures are about. I think I’m gonna go watch something less aggressive and dangerous than campers getting deSSerts. Maybe tonights eposide of Shark Week??

You guys have a great night, I’m gonna go get my bearings so I can safely navigate this estrogen ocean I’m in and get ready for tomorrow!!

Have a good one!