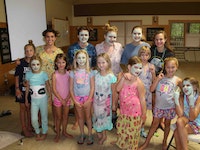 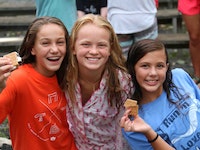 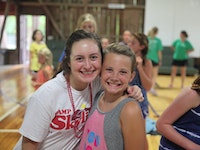 Hellooooooo Parents and welcome to opening day of 4th session 2017! You guys did an amazing job this morning getting everyone moved into their cabins and ready for the fun this session. It seemed like it took no time at all to get everyone all settled in. My hat’s off to all the fist time camp parents out there, you guys showed up in numbers today at the new parent meeting and had some great questions and if you are a first time camp parent and are reading this, congratulations, you’ve made it this far and that means your doin’ great. You home computer expert (your camper) would be so proud of you for making this far on the webpage with logging on even remembering your password and everything.

It didn’t take your campers long to get in the swing of things this morning, I bet you guys hadn’t even gotten all off the mountain before they were playing some “get to know ya” games with all their new friends and cabin mates. I’m sure by now they know everyone in their cabin by their first name and even where they’re from. After all the games they went on a camp tour (hey, we wouldn’t want the little darlings to get lost while they’re at camp would we?) and then it was to the gym to sign up for their activities this session. now don’t worry folks, you’ll be gettin’ a card in the mail soon with their schedule on it as well as which club they’re in. Now don’t go waiting out by your mailbox for that card, I’m not saying the mailmanup here in Mentone is slow but its been rumored that he takes an hour and a half to watch the TV show “60 Minutes”…know what I mean??? It will get to ya in a few days but don’t be alarmed if it takes longer than you think it might.

Also on the card will be which club your camper is in. Now this is some important information if you want to keep peace in the family. ‘Cause once these girls are in a club, they’re in it for life and they treat it that way. The last thing ya want to do is cause a family feud by calling your camper by the wrong club name, it could lead to some serious conflicts down the road if you’re not careful. Here’s a little tip for you folks playing along at home though. In today’s cabin and club picture folder you can get a sneak peek at which club your camper is in. If they’re wearing a shirt with “Skyline” in red, then they’re a Mountie, if its in blue, they’re a Ranger and if its in green, then they’re a Trooper. If your camper is wearing a shirt with it written in all 3 colors, well then, that means they’ve been here a while and they’re wearing an older shirt and you’ll have to go by the color of their shorts. I know it seems like a lot of work but trust me folks, its worth the hassle to get it right and not upset your camper or embarrass yourself by using the wrong club name.

Now after lunch everyone got their Skyline Sister where we split up the campers by age and the younger campers take off one of their shoes and put it in a bag. The bag is taken to the older campers and each one takes out a shoe and returns to the gym and when they find the owner of the shoe they have, thats their Skyline sister and new friend for the session. Its kind of a “big sis- little sis” thing and the girls love it. I don’t think the whole shoe thing would work at a boys camp, or at least I know it sure wouldn’t work if they used one of my shoes, we’d have to issue gas mask for the poor person that had mine and they sure wouldn’t want to be my friend after having to hold one of my used shoes!

Now tonight after dinner, we decided to keep with the get to know ya activities as each cabin got to choose their own fun filled activity in Cabin Fun Night. There were all sorts of spa and make overs, tic tac toe charades and as you can tell from all the pics, plenty of shaving cream wars all around camp. I’m pretty sure it will take at least a week of rain to get the smell of menthol shaving cream out of our grass all over camp there was so much shaving cream everywhere. The campers loved it and you can see for yourself, they were covered from head to toe with it.

Of course every camp got to come to the campfire and enjoy a S’more or two and then everyone camp to the campfire for tonights evening devotion from Sarah Kate about our summer theme of “Ignite”. She talked about how on a recent caving trip we took her on it was so dark in the cave you couldn’t even see your hand in front of your face. But when just one person turned on their headlamp, the light from just that one bulb was enough for everyone to see much more than that thought they would be able too. She told all the campers that thats the way Gods love is for us and everyone is going to have the opportunity while they’re here at camp to be the guiding light for someone else, even if they’re not aware of it. They’re actions will help light the way for another person and help them see God’s love. All the campers really listened and took in what she was saying throughout the whole devotion.

Now tomorrow we’ll be full speed at the first day of activities and all the campers will be learning what to do in their classes. We’ll be there too catching all the action for ya and getting into ya just as fast as we can.

Speaking of full speed ahead, tomorrow night were gonna crank up the action another notch and have a wild and fast paced activity called “sock wars”. This is where the campers will dress up in their club colors and crazy outfits (that may explain why their trunks were so heavy today!!) as each club defends their area of camp by throwing stuffed socks (don’t worry moms, we supply the socks and they’re stuffed with sawdust) at other camps in other clubs as they make their way around camp looking for each clubs flags and trying to get them back to the scorers table. now if they’re hit by a stuffed sock thats thrown by another camper all they have to do is report to the scorers table and they ‘re back in the game. If you’re confused, just try to imagine all the campers dressed and painted up in their club colors and about 1,000 stuffed socks being thrown around camp at each other as they lead charge after charge to take the other clubs flag. See…..it’s as easy as heading cats and keeping score!! Piece of cake!!

Well, its been along day and I know you guys are probably ALMOST as tired as I am so I’m gonna let ya go and get some rest. For all you rookie camp parents out there be sure to pace yourself over the next 2 weeks, you’re gonna spend a LOT more time on this computer that you thought….trust me!!

You guys have a good night, I’m gonna catch some shut eye and I’ll be back here tomorrow and fill ya in with everything that went on during the day.

Have a good one!!