Posted by Larry Johnson on July 24 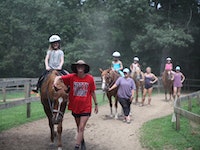 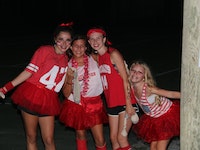 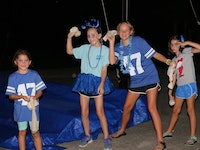 An early hello to ya parents!! (can you believe it??its only 5:00 and I’m already starting the blog!!!) I was able to find a mythical creature called “free time” during the afternoon so I thought I’d get started on the blog and see if I can get it out to ya a little earlier tonight than usual. Now don’t go and get used to this, this free time is as surprising to me as it is to you guys at home so lets just enjoy it while it last!!

Its been a busy and warm day up here today but to tel ya the truth, I just came back from running an errand off the mountain and its about 10 degrees hotter down in the valley than it is up here on top. Its good that were up here, we get a little more wind blowing to help keep everything cooler than what you guys are probably working with back home.

Anyway, the campers didn’t let the heat bother them or slow them down as they ran from activity to activity seeing all the new things they get todo and play on. They were especially happy to get to horseback and see their favorite horse from last year and start making some laps around the ring on them. Circus and ropes were a big hit too as they all eagerly sat through the “first day instructions” and then suited up in their harnesses and got in the air to play in the sky. Of course no one minded arts and crafts or poetry as both of those activities are in the shade (how did I never get to work in those classes??…..maybe has something to do with needing to be artistic??). And needless to say, every camper that was doing their swim test in the pool was grinnin’ ear to ear as they hoped right in the water and swam like they were Michael Phelps (no sharks to race though!!).

Tonight they’ll all come to dinner dressed and painted up in their club colors as they head out after dinner to different areas of the camp to hide their club flag and when we ring the bell to start the activity, they’ll all head across camp and try to find the other clubs flags, but WATCH OUT!!! If they get hit by a stuffed sock thats thrown at them from a camper in another club, they’ll have to report to the scorers table before they can get back in the game. Of course it seems to help (or at least they think it does??) if they yell and chant their club cheers as they trow their arms out, um….I mean throw socks at each other during eh while game. Needless to say after a couple hours of yelling, running and throwing socks around, they’re all gonna sleep pretty darn good tonight.

I don’t wanna write about the outcome of Sock wars since it ain’t happened yet so I’m gonna take a little break and get back to you guys just as soon as they finish with all the details and results. You guys hang in there, I’ll be back in just a little while……LJ

OK folks, I’m back now from Sock wars and it was a wild battle all night long with socks after socks being thrown around at each other. The campers were running around forward and backward (especially when they ran out of socks and the other clubs still had some to throw!). One of the standout moments of tonights match was right in the middle of a big battle, I heard someone calling my name to come over to their area. Thinking someone might have fallen down or something like that I rushed (you know…as best I can) right on over only to find a camper that had a HUGE frog and wanted a picture with it. Forget the battle and campers dodging socks, yelling and cheering……here was a camper that found a big frog and at that moment in time, nothing else mattered except getting a picture with it. Talk about perspective, she was oblivious to all the commotion going on around her and I stood there in disbelief just watching her whole attention be focused on her new friend. And for those of y’all wondering……yes, I tried to get her to kiss it and see if it turned into a prince……don’t worry mom, she didn’t do it :-)

At the end of the night and after all the arms, um…I mean socks were thrown out, the final results were……………… Can you hear the drum roll in your head??…….. the Troopers!!! Way to go ladies!!

Heres a first for camp as far as I know, the Mounties found the Golden Horseshoe on the very first day all the campers were looking for it. That means some big points to their club towards the point cup awarded at the end of the session. Now its up to them (Mounties) to hide it again and hope no other camper from another club finds it. Oh yea, and to top it all off….. it was found by a mini camper!!

Tomorrow will be another busy day here with all the classes going and then tomorrow night we’ll slow things down so the campus can get a little rest and get their legs back under ‘em. We’ll all meet in the gym for our big Skyline Talent show. All the campers that are in it will get the chance to show their talents up on the stage. We’ll be there to get all the pics and brig ya the results just as soon as they are finished. be sure to check back in and see how your camper did tomorrow.

Well, its starting to get late and I’m having to use toothpicks to help keep my eyelids open and although I’m no doctor, I’m pretty sure thats not a good thing so I’m gonna head off and leave you guys at home to all the pictures. Have a great night and we’ll see ya back here tomorrow night!!

Here's highlights from Day 2!! Have a great night!!