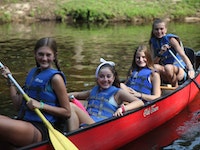 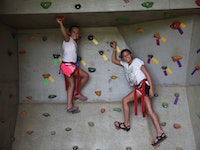 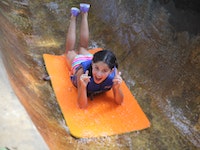 Well howdy parents and welcome to Day 3!! Man oh man, it has been a busy and exciting week this week!! All the action, the drama, the way they just attack their food when they’re eating their meals, and you guys…. getting to watch it first hand and learn all the new things that happening each day…..but enough about “Shark Week” on Discovery channel, let’s talk about everything thats going on at camp this week!!

Actually the meal thing is pretty close to the same as the sharks, these campers can go through some food, Its crazy at meal time and then when the deserts appear, it’s pretty close to a feeding frenzy and some of those campers look just like a shark breeching the surface if the desert is brownies or snickerdoodles!! Don’t get your hand close by, you might loose a digit or two if you’re not careful. Needless to say they have been loving the meals and putting away the calories. Did I mention what happens when they finish their food?? Nothing is quite as nice as having 200 of your closest little friends compete “table vs table”, all at the same time, to see which song everyone will “sing” next. And by “sing”, I mean belt it as loud as they can at the top of their lungs. I’m pretty sure if we were on a beach, they could scare off any sharks that actually may be in the area (20 mile radius?). You really need to get your camper to play this “sing after you eat” game when they get home. Just make sure you don’t have anything breakable on the table cause their hands and toes are slappin’ and tappin’ too. Really….play it when they get home…..I dare you.

Now when they aren’t devouring food like a Great White, they’re busy out in camp playing and learning all sorts of new things in all their activities. Today while I was loading some new “Frios” pops in Beli Deli, I took a little break and looked around and it was amazing what I saw. There were campers making their way across a cable about15 feet in the air to a platform where they would get hooked in and swing down on a giant V swing. Just 20 yards past that were about 20 campers testing their courage and balance on our “Ropes 2” static course made of all sorts of obstacles on 2 different levels 20 and 30 feet up in the air. Beyond that were the campers out in circus class and you know those ladies were challenging themselves with circus acts and it looked like they weren’t scared one little bit. Off to my right was a group going through some tennis drills and playing games on the tennis courts. Just past that were about 30 campers working on their horseback skills and some of them were learning how to groom and then they were washing a horse. As I kept looking around you could hear the “thud” of arrows from our campers in archery hitting the targets and them cheering when one of them would hit a bulls-eye. Completing the scan of camp, there were several campers sittin’ in on of our huge Adirondack chairs and would you believe, they were just talking and carrying on a conversation and heres the kicker, it was definitely more than 140 characters in length and they were actually looking at each other as they spoke. Who would have ever thought that was (still) possible??!!! I tell ya folks, these campers are “re”learning all sorts of new skills up here this session.

Later in the day all the campers in swimming class found all sorts of wild and crazy ways to get in the river to cool off. I’m not sure which way was more popular, the waterslide or the blob? You can look through all Isabel’s pictures and see if you can decide for yourself. To tell ya the truth, I don’t think they minded which way they got in the river as long as they were getting in there and having fun as they did it. I know it felt good for them to cool off with the sun shinning like it was.

Now that sun we were just talking about….well, it didn’t stay out all day. Mother Nature decided to give camp a good shower during last period of the day but that did help in dropping the temperature down about 10 degrees for our nighttime activity.

Speaking of nighttime activity, tonight we had our Talent Show here at camp and I’m really surprised we didn’t have Simon from that America’s Got Talent show here scouting for his next episode. The campers showed all sorts of great skills as they sang, danced, played the piano, gymnastics, and even playing the ukulele. One camper even put on a karate demonstration. Everyone did a great job, and all the campers really enjoyed the show they got from the campers brave enough to get up on stage in front of everyone and show their skills!

Now tomorrow night we’re gonna crank things back up a bit as we play “Get Skyline Back”. This is where the stinky ole counselors from the boys camp (Camp Laney- Not really, it will be our counselors dressed as them) will bust into the dinning hall and kidnap the club leaders and their club flags and take them out into camp. Now don’t think for a minute that your campers will stand for that (remember the beginning of the blog….no one should mess with these girls while they’re eating!!). Your campers will head out to rescue and recover their leaders and club flags and all they have to do is figure out a clue that tells them where their leaders are being held and then go there and get 4 campers around the legs of the counselors without being hit by a stuffed sock that counselors have and use to defend themselves with. If you’re picturing all the campers charging, wave after wave, at a group of counselors and diving at their legs trying to get hold of the all while dodging hundreds of socks being hurled at them then you’re pretty much in the right ballpark. If you’re still confused, just wait till you see the pictures and then you’ll really not understand and be totally lost. But the campers love it and they have a blast getting their leaders back and taking down the counselors. Be sure to check back in and see how your campers club does. The winning club gets points towards the Point Cup thats awarded at the end of the session so they (the campers) are back to their feeding frenzy state of mind as they go after the counselors.

We’ll thats a lot of info for one night. I don’t want to overload your imagination and besides, there’s still some time to catch the end of the Discovery channel tonight so I’m gonna head out.

You guys have a good one and be sure to tune in tomorrow for the results. There’ll be fins to the left, fins to the right, feeding frenzy here at Camp Skyline tonight!!!

Have a good night!