Its the bottom of the 8th

Posted by Larry Johnson on June 27 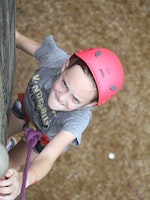 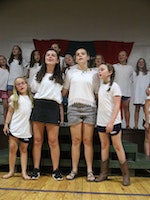 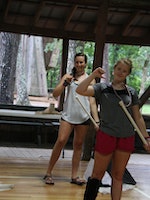 Helloooooo parents for one last time this session!! Howdy y’all! can you believe this will be the last blog of the session? Man, time has surly flown by these past two weeks. It seems like it was only yesterday that we were just getting introduced and gettin’ to know one another on line. The reason for this being the last blog is simple actually. Tomorrow night we’ll have our end of session banquet (more on that later) and then river vespers and our final moment for all our age out campers. While all that is going on down at the river, I’ll be up in the office putting all the pictures you’ve been looking at this session on a Camp Skyline Ranch USB that we’ll have ready for ya as soon as you get here Friday morning (for those of y’all figuring all this out in your head, yea…..its gonna be a long night for me) so that might explain the extra tired look I’ll have Friday morning when I see ya at the front office.

Now as far as today goes, well, there just ain’t any room to be tired with all the action going on around camp. We had our horse show to determine who will be competing in the Grand Championship tomorrow in front of the whole camp. The ladies at circus were getting in their last try at the tricks they will be showing everyone tomorrow. Arts and crafts wrapped up their final projects and of course, the girls down on the river were getting in their last blobs and rides down the waterslide.

Tonight we had our Cabaret where our drama class put on one heck of a show for everyone as their campers in drama class, performed “Songs From Broadway”. Folks, I gotta tell ya, those girls have some pipes on ‘em! I was blown away at how good they sounded and forget about having courage on the ropes course or on horseback. To stand up on that stage in front of everyone and belt out the songs like they did was nothing short of amazing! They sounded great and deserved every one of the Standing O’s they got from all the campers (probably deserved more if ya ask me!!)

If ya read last nights blog, I talked about Mother Nature having “last at bat” and how we would have to do our fireworks tonight thanks to a front strangler of a downpour she gave us last night. Well, wouldn’t ya know….. it seems that last night was just the bottom of the 7th and she hit a grand slam on us then so we retried the fireworks again tonight after campfire. Well…….. Its the bottom of the 8th now with bases loaded (I mean they were loaded!! We had fireworks set out, campers were getting into their watch area and all of a sudden the distant sky started to light up so everyone had to go back to their cabins and we were forced to postpone our fireworks again for the 2nd straight night. Seems like Mother Nature is on somewhat of a hot streak ‘cause she belted it out of the park again on us and forced us to try again tomorrow night after banquet. Apparently Mother Nature is somewhat of a really good pitch hitter in these circumstances. We’ll pull out our ace reliever tomorrow night and see if we can get things to go the way we want them to then. Just don’t any of y’all out there say anything about it to Mother Nature, we’re hoping to surprise her tomorrow night!!

Tomorrow night is also our end of session banquet where we’ll find out who the winners of our Points Cup, Horse Cup and the coveted Eloise H. Temple Spirit cup will be. Another great time of camp will be when we announce who the Honor Campers and Honor Counselors. Its a great moment to see what it means to the girls when their name is called and they’re recognized for being as special as they are. Then the part where I could retire if I could find a way to get it sponsored by Kleenex. The end of the banquet, (or as I sometimes call it- “cry fest 2018”).This is a special moment to all the girls. When they realize their time at camp is coming to an end and the friends they’ve grown accustomed to seeing everyday will be gone for another year (thank goodness to social media, some of ‘em will be right back in touch Monday). This really is a moving moment to see what their time together has meant to them and how much they’re gonna miss it and one another. You may think I’m exaggerating on this, but trust me, its an emotional time when they all start to say good bye!

Now not only do we need to get our banquet and fireworks in tomorrow night, but like I mentioned earlier, after banquet we’ll all be heading down to the river for river vespers. This is where our counselor choir will come down the river in canoes with torches singing our camp songs. After that we’ll have a short speech from Sally and then our cabin wishes for the next year. Now this is where I get rid of the jokes and it gets serious. Each of our “age out” campers (ones who have attended their last session of camp as a camper) will give a speech they wrote to the rest of camp as they sit on the backs of Little River listening. Forget any polished speech you may have heard from a politician (don’t we all try to do that anyway??) ‘cause these girls bring it to ya straight from the heart and it’s better than anything you’ve ever heard before. It’s hard to believe they are only 16-16 years old and giving talks like this. I always find a way to sneak down to the river to catch this portion of the vespers cause its just that dad gum good!

Being an age out is a special year at camp. Not only do you get to take our LT (Leadership training) class but to top it all off, Sally always cooks a special home cooked meal for them at our house on the last Wednesday night of camp (yep….that was tonight!) They got to enjoy snacks, beef tenderloin, mashed potatoes, and of course their choice of homemade Oreo or Butterfinger ice cream!! Not a bad deal at all and those girls took full advantage of the food. There wasn’t a piece left when they finished (ummmmm….there wasn’t any ice cream left either and no, I haven’t been home yet so you guys at home aren’t the only ones that missed out on that!)

Well, its been a fun session, and I really want to thank all y’all for playing along at home these past two weeks. Not only do we appreciate you guys that tune in every night to see and read about what happened at camp but more importantly for trusting us here at Skyline with your most prized possession and allowing her to have fun and grow with us here. It really has been a special moment and I can’t wait till you see how different your camper will be when you pick her up. Heres a veteran tip for ya, I wouldn’t plan on any quick pick up and leave scenarios cause like I said before, they’ll still have a lot of “Good-bye” saying to do to all their cabin mates before they actually leave.

You guys have a safe trip up the mountain Friday, we’ll see ya in the front parking lot when you get here. Oh by the way, if you’ve enjoyed the pictures and videos each day and night, the girls that have been putting all that together for you everyday will be there to help you with any questions or to just say hi. Be sure to tell ‘em “hi” when you see them.

Today was sad because it was the last day of activities. However, we still had loads of fun, and we had the cabaret tonight! Music Credit to Daryl Hall and J...