Sock Wars and a nap

Posted by Larry Johnson on June 04 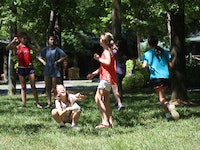 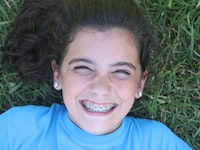 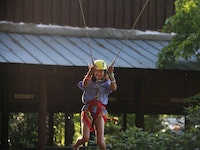 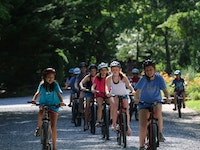 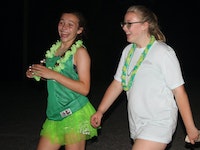 Howdy parents!! It’s me, LJ again with all the action from the mountain today. I tell ya, I don’t know how all your campers do it, they have been running around all day from activity to activity and then tonight they were “full in” to playing Sock Wars. And they didn’t miss a beat. I wish I could say the same about me, I made it through sock wars but I’d be lying if I told ya I didn’t sneak over to the house to catch a quick nap before I came back in the office tonight to share the news with ya. It like they can watch the show “60 Minutes” in half an hour and its taking me an hour and a half. Know what I mean? Anyway, I’ve had my quick rest and am ready to go so sit back, hang on and lets get ya caught up on everything from today.

It didn’t take long today before i noticed something happening over and over again. All the campers were together. Not in one big group, but everywhere I looked, all day long, the campers were always hanging out with each other in everything they were doing. From playing basketball, gaga ball, or just sitting around playing with Piper the camp dog. No matter where I looked, there were different age girls always hanging out together like they had all known each other for years and its only the 2nd day of camp. I even started to look to see how many times I saw campers together during their free time and to tell ya the truth, I lost count early in the day.

When they didn’t have free time today all the campers were busy learning all their new activities. It didn’t take them log before I saw them making their rounds on horseback around the rings and swinging through the air out in the circus class. I didn’t make it down to riflery but I could hear them making their shots and then saw several campers carrying their targets so I assume they must have been pretty good shots. I know our photographers did make it down that way and there are some good pics up in todays pictures from that part of camp. Be sure to check ‘em out and see how well they did for yourself.

After all the classes today all the campers came into the dining hall decked out in their club colors and ready to go for some club points in tonights activity Sock Wars. Now if ya don’t know what they is, then you oughta go back and read last nights blog and see what all the hoopla was about. Once they got to their parts of camp and each club hid their club flag, we rang the bell and the action was on! They didn’t waste any time before they were engaged in sock battles all around camp and filling the air with stuffed socks trying to get each other out while looking for the other clubs flag. Sometimes there were large scale wars going on between large groups of campers and sometimes it was just one 8 year old puttin’ 4 or 5 older campers on the run ‘cause she had a sock and wasn’t afraid to use it (and quite frankly, NO ONE knew which direction it was gonna go when she did throw it!) Needless to say, after a full night of sock throwin’, sock dodgin’ and chasing each other around the camp, the final results were …………………. (can ya hear that little drum roll in your head yet?)………. Rangers 3rd, Troopers 2nd and the MIGHTY MOUNTIES 1ST!!!!!!! Way to go girls! They earned some big points for their club in the chase for the point cup thats awarded to the club with the highest points at the end of the session.

Now tomorrow night were gonna slow things down a bit (thank goodness!!!!) and let all our campers that sign up participate in our Skyline Talent Show. Forget America’s Got Talent, or The Voice, this is where the real talent will be and we’ll be right there catching all the action for ya and gettin’ it to ya just as fast as we can.

Tomorrows going to be another fast paced day in the classes as everyone will be jumping right into the activities and I’m pretty sure the blob or water slide will be in play down on the water front. I can’t wait to get down there and see how they do getting into the river from being launched from the blob or flying across the river from the waterslide. Don’t worry, we’ll get plenty of pics and videos so you guys playing along at home will be able to join the fun too (well, sort of…..)

You guys at home who have campers here for the first time I need to give ya a little warning though. You gotta pace yourself with this internet thing. If ya don’t take your time, you guys will burn your self out quicker than you can believe. So go ahead, step away from the computer, let go of the mouse and head on off to bed, You’re starting to look as tired as me and that ain’t a good thing.

You guys have a great night and we’ll see ya tomorrow. No go on, go get some sleep….don’t say I didn’t warn ya!!

Have a good night,