Posted by Larry Johnson on June 11 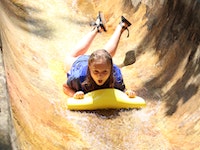 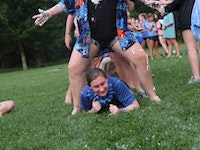 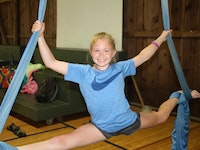 Hi Parents, Hope you guys playing along at home had as an eventful day as we did up here on the mountain. The canoe trip I talked about last night wasn’t able to an out this morning due to some impending weather in the area. It never really developed until much later in the day, but better safe than sorry when it comes to being on the water. As I was saying it has been a cool day with the extra cloud cover we’ve had and then later today we did get a good rain shower. I don’t think anyone actually minded having the rain today, it cooled everything down and all the campers went to their rainy day locations and continued with the classes or games.

I forgot to tell ya about our activity tonight called Speed Challenge. Its where we have a series of crazy relay races, like blob run, hula hoop relay, the cover your partner with shaving cream relay, one of my personal favorites, the wrap your club in toilet paper relay, and of course the crawl through the legs to the front relay. Now these aren’t your ordinary relays, all the clubs were on the outside of a large circle and all the supplies were in a smaller circle in the middle. The first group of girls had to run to the middle as a blob with half the girls holding hands in the form of a blob and the other half of the girls were inside their blob circle. Once they got the middle they changed places and then ran back to the outside. As soon as they got back to the outside of the big circle the next group of girls in the next relay started their relay and when they got back the next group started and on and on. This happened for 10 different relay races back to back to back and so forth. And that was just the girls in Riverside. As soon as they were finished with their 10 relay races, we rest everything and then the girls of Summer place went. Then the ladies of the Lodge and then half of Hut Row and then theater half go Hut Row. So yea… if your math os correct there were around 50 relay races run tonight. All back to back to back and all crazy and sloppy fun! What did the girl that weren’t racing in each race do you ask (I’m glad you asked), well, they were cheering and shouting on encouragement as loud as they could all night long. You could hear them cheer all across the mountain. Theres no doubt in my mind they ALL are sleeping very well tonight!!

After al the racing and cheering was finished, the wining club was………….(hear that little drum roll in your head again??)……. the MOUNTIES took the championship for another victory! Way to go to all the girls, they gave it everything they had and then some tonight!! Be sure to check out the pics and see for yourself all the crazy races we had.

Tomorrow will be a little different day as we won’t have any classes because of our first ever “Color Wars”. We will have color war competition between all the clubs all day long and we’ll cap the day off with the All Camp Activity Color War with the powdered paint.

Since this is the first time we’re doing this, I’m gonna be as surprised as you guys are tomorrow and can’t wait to show ya everything that happens up here. Be sure to check back in and see what happens. I know I can’t wait to see myself!!

We’ll its la little shorter tonight, but since it’s so late hopefully thats ok, you guys have a great night and get ready for some colorful times tomorrow!!

Have a good one,