Talent night and a walk through camp

Posted by Larry Johnson on June 05 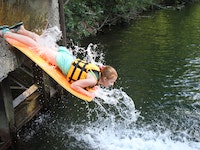 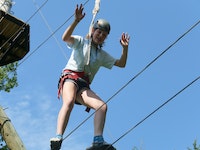 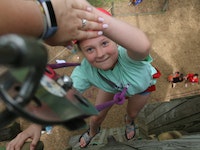 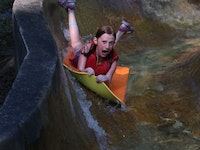 Well hello again parents and welcome to day 3 of camp! First but definitely not foremost, whoever has the hook up with Mother Nature and this weeks weather, we certainly do appreciate it!! It’s so hard to get out of bed in the morning when the temps are in the upper 50’s and theres no humidity around. I know the campers really love to cool days (it only reached 80 degrees) and constant breezes that blow though camp.

Your campers have been off and runnin’ all day. As a matter of fact when I was making my rounds through camp I saw a group of girls running towards me. I thought something was wrong and then they informed me they were part of the fitness class and were making their laps on the exercise trail. I thought about joining them but then I remembered Proverbs 28:1 “the wicked run when no one is chasing them, but the righteous are bold as a lion” soooo… there went that whole running thing.

As I made my way (walking, no doubt) I was able to see some of the projects in arts and crafts are already coming together and those campers have some skills. Even most of the mini camper projects were looking a WHOLE LOT better than anything I could ever do down there. After a while I made it around the circus area (walking still of course) and watched some fo the campers there work on their “seats off” trick. Now I know this is only day 2 in the class, but imagine if you were up on a could swing, swinging through the air and then someone told you to spread your feet really wide and fall back and catch the swing with your feet on the way down! Well, they had no problem doing it and you could see from the smiles on their faces when they finished they were awfully proud of what they had accomplished. Be sure to check out some of the great pics from that area of camp today. I know the photographers were over in that area and I bet they got some really good shots.

From circus I headed over towards the rifle range and “carefully” watched the girls work on their shooting skills. Some of you parents at home are gonna be proud when you see their targets, y’all got some real Annie Oakley’s out there (I may be dating myself, if you don’t know who Annie Oakley is, you can google her). I’m sure as the session moves along their grouping will get better and better. I think there were some today that already knocked out the bullseye. Some of y’all may be getting some targets mailed to you real soon.

Speaking of mail, the campers love their mail time (me too but thats only because its the same time as rest hour!!). They get excited when mail call comes around and they’re letters and emails from home to read. If you didn’t know already, email gets printed out each morning at 9:00 central time and is handed out with the regular mail right after lunch. And here’s my pro tip of the day for email. Each email is $1 charged to the camper spending account. They’re all printed out each morning and delivered at lunch. To best use the email, if you want to send several messages through out day, type any “small messages” on a word or pages document and then paste them all onto the email at the end of the night. That way you’re only sending 1 email and it only cost $1 instead of 3 or 4 small emails a day and a $3 or $4 charge to their account. They’ll still get them the next day at lunch.

Finally later in the day I made my way towards the waterfront. It sure didn’t take long for the girls to figure out the blob or play “king of the mat” on the Lily Pad in the river. If ya look through all the pictures (and who out there doesn’t???) you’ll find some near the end of some campers that were braving the waterslide. From the looks of the ear to ear grins when they came up, I’d say it was a hit!

Now I’ve told you about some of the activities we have and what I’ve seen with all the campers jumping right into action in everything but believe it or not, those fun classes aren’t even the reason Skyline is so special. What makes it special is the relationships they build with each other and their counselors. As I was walking (of course) around camp today, one small camper asked me how to get to the place to change her classes they signed up for. I told her I’d take her there instead of giving her directions (she had just come from Beli Deli and had her hands full of snacks and a Frios pop so she was a little preoccupied). As we we’re walking towards the office, I asked her which classes she was dropping and which one she was picking up. When she told me, I asked if she didn’t like the class and she said “oh non, I like it but my counselor teaches the other class and she is so sweet I want to be in class with her”. And that, ladies and gentlemen is why you send your daughters to camp. They may remember which tricks they did in circus or how they shot in rifelry, but they will always remember the relationships they build with each other for a lifetime. (yea, this issue should be sponsored by Kleenex)

Tonight we decided to slow things down a bit and let all the campers get their legs back under ‘em while they enjoyed our very own Skyline Talent night. All the camper that preformed were top notch and I do mean TOP NOTCH! We had everything from singing, to gymnastics, piano and guitar playin’, and more. The campers really enjoyed the show and you could hear them cheering each other on all over the mountain. All the campers were great and the judges had a hard time picking the routines that stood out but they finally did and came up with tonights winners…………..(ya hear that drum roll in your head again?)………….. Groups 1,2,3&4 3rd: Carrie Young 2nd: Collete Fancher, Caullier McMullen & Ann Reed Tayler 1st: Ellie Mayfield Overall winner: Daisey Whittingham

Congrats to all the girls, they all did an outstanding job.

Well, its another cool night so I think I’ll head back over to the house and hit the hay (and you know…….. I’m gonna walk over, no need to give in and start that running stuff). You guys have a great night and enjoy the pics and video. Don’t forget what I said about pacing yourself. We still have a long way to go and I don’t want ya gettin’ tired on me just yet!