Dance Night- Party in the USA

Posted by Larry Johnson on July 06 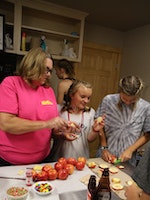 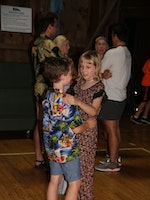 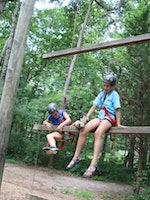 Hellooooo again parents and Happy Friday to ya!! (its always happy when its a Friday!!). Man, what day we had up here. We had a little bit of everything going on today, including sun in the morning, rain and thunder during rest hour and then cool temps this evening to make everything seem just right for our big dance with Camp Laney tonight. I guess you could say we had it all, only thing missing would be snow and since it’s Christmas in July, who knows? Maybe the cooler weather will bring some snow Christmas morning…… you’ll have to tune back in and find out.

To start the day off, like we said, it was sunny and warm. All the campers were busy in their classes and I got to enjoy watching some of the campers shooting archery this morning as I was doing some work on several of our bows. It was hard to get any work done ‘cause every few minutes, I would hear, ‘Larry watch me shoot” so I would take a break and watch them sling some arrows downrange and most of them hit pretty close to where they were aiming. (or at least they were pretty quick to say they were aiming wherever the arrow hit!). It was fun to watch the girls work on their skills and to see how they are getting better from the beginning of the session.

After lunch it was time for a much needed (at least by me!) rest hour. Now the only thing better than a normal rest hour would be and extended rest hour. Now the only better than an extended rest hour would be an extended rest hour due to rain and getting to fall to sleep in bed listening to the sound of rain hitting the tin roof of the cabin. (ya gettin’ tired yet?). Well folks, we had it all. the rain came right on time as everyone had been in their cabin about 5 minutes before the bottom fell out. To make it the best of all worlds, was the sound of some distant and some not so distant thunder rolling across the mountain. Yep, we had that too and it was a great time to catch some ZZZZZ’s and lay back for awhile.

After the extra long rest hour it was time for classes and everyone went to their rainy day locations cause it was still pretty wet and there was more rain on the way. Most campers were in the gym and enjoyed playing some games like dodgeball, redfish and blue fish, and in/out. Those that didn’t want to play seemed to enjoy the quiet time hanging out with new friends and just relaxing to the sound of more rain hitting the gym roof.

During 5th and 6th periods we were still in rainy day locations and that gave us an opportunity to teach the ropes course and rock climbing classes how to climb up ropes. Now anyone can repell DOWN a rope, thats pretty easy but we took the girls and taught them how to ascend UP the ropes like we do when were climbing up after a repelling trip or when were climbing up out of a pit. They loved learning their new skill and they found out it isn’t as easy as it looks but they pushed through and made their way to the top of the gym even as we fed them more rope that put them on a “vertical treadmill” and let them climb 50-60 feet of rope in a 15 foot high area. You could tell from the looks on their faces they were proud of reaching the top as well as being pretty tired too! Be sure to check out the pics and see if you can find your camper climbing the rope and ask them about it when you see ‘em.

Now to the special part of the day, the dance with Camp Laney. Since we still had a little threat of rain in the near future, the dance was moved into the gym so everyone would stay dry in case it happened. I don’t think anyone minded dancing in the gym and they didn’t waste any time welcoming the boys from Laney to the gym as they formed a human tunnel for them to come through as they made their entrance. Of course it was easy to get the tunnel formed and we had plenty of time cause you could tell the boys buses were getting close by the overpowering smell of AXE body spray that arrived at camp about 3 minutes before their busses did! It was the perfect “get ready” signal to let us all know they were on their way. Some of the campers took advantage to the time to help teach other campers how to swing dance and the looked pretty dad gum good at it. It was great to watch them dance together showing off they’re new moves. You can see for yourself in the video how much fun everyone was having. For the record, I was WAY off base when I said last night the theme was “Tacky Christmas sweater” it was actually “Party in the USA” and there was plenty of red, white and blue to be seen by everyone in the gym. Needless to say they represented their country well tonight with how they were dressed and also how well they danced. It definitely was a party in the USA up on the mountain tonight!

By now all the campers are fast asleep and dreaming of the dance moves they learned or what the’re looking forward to tomorrow. One thing they’ll all be looking forward to is tomorrow nights activity. Like we’ve been saying all week, this is our “Christmas in July” session and tomorrow night will be Christmas Eve! We’ll have all sorts of games, face painting, ornament making, and everyone’s favorite, Christmas Cookie decorating! Its gonna be a sweet time with all that sugar icing to top off the Christmas cookies! Everyone is getting excited about the coming of Christmas morning on Sunday and finding out who their secret Santa is along with getting to see the big guy himself deliver presents on Sunday morning! Tomorrow nights “Santa’s workshop” will be the perfect tune up to get everyone ready for the big day!

We’ll since Christmas day is getting close and you know who “knows if you’ve been sleeping” or not, I don’t want to take any chances on getting coal in my stocking and come up short on the sleeping or not list. I think I’ll head off and try to get some sleep so I can make it through the day with the rest of your campers (how they still have the energy they do is beyond me…… must have something to do with that “youth” thing……..I think I fell off that list years ago!!)

You guys have a great night, enjoy the night time rain if ya have any and get some good sleep. We’re wrapping up week one and getting ready to kick the tires and light the fire on week two, so make sure your buckled up and ready for the ride!!

Y’all have a great night and I’ll see ya back here tomorrow just as soon as I finish a few Christmas cookies myself!