Well howdy parents and welcome to week 2 of 4th session! Its been a fun week so far and today was no different. Early this morning as soon as they were finished with breakfast, we had a group fo campers head out for an out of camp trip to challenge the white waters of the Ocoee River up in TN. They were all worn out when they got back but they still managed to let us know they had an incredible time on the rapids. They brought back their pics and video so it should make it on tonights video. I’m like you, I haven’t seen it yet either and can’t wait to see some of the fun they had.

The rest of the campers were enjoying the day. There was a steady stream of campers playing gaga ball all day long and another big draw this session is the corn hole boards.During our Beli Deli time, all the campers get their snacks and then make their way over to the corn hole boards. Before long, there are 4 serious games of corn hole going and these girls are gettin’ good! They’ll definitely be ready for the upcoming football season if you parents out there are looking for any pregame partners this fall.

When I say the campers have been busy, I’m joking. 4th session is known as our VMA (Video Music Award) session and each cabin makes their own music video to be previewed tomorrow night. So besides all the action of their activities, they’ve been busy learning all their parts for their video and this means they have to get them filmed and edited during rest hour so for the past few days, there has not been any rest for the weary. They’ve been working everyday since last Thursday filming out in camp and getting all their shots set up. Its sure to be a fun night tomorrow when we all get dressed up and make our way up the red carpet into the gym for the big awards presentation and the first time viewing of all their videos. Everyone will dress up in all sorts of costumes (no wonder their trunks were so heavy during check in) and we’ll have different presenters that will read out the nominees and the eventual winner of each category. Its always a fun night and the campers love getting to see the finished product of all their hard work (plus now maybe we can get back to enjoying rest hour a little more!!) Be sure to check back in tomorrow so you can see all the stars as they walk the red carpet! 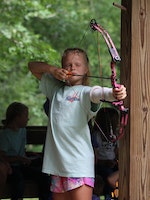 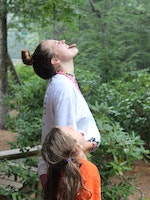 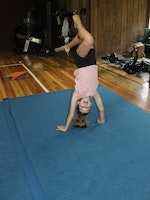 Now before we go on about tomorrow, we have to finish talking about tonight. Tonight was a really exciting night full of energy and all kinds of unexpected outcomes, but enough about tonights episode of “Shark week”, lets get back to the campers. Tonight we had our Speed Challenge where we have the campers divided into groups by their age and each group had to complete a series of 10 relay races. Once each group was finished with all 10 relays, we would reset and reload and get ready to do it again with another age group, and then again, and again, and one more time. So for those of y’all keeping track at home, thats 5 sets of 10 relays for a total of 50 relay races. Some of the relays were getting your whole group to run to the center of a big circle and then one person takes a roll of toilet paper and wraps it around the rest of the group over and over again until the roll runs out of paper, another relay was the 4 camper to the middle and then 2 of the campers cover the other two in shaving cream, the roll the basketball with your head relay, and of course the wet sponge over the head and then between your legs relay. There were all sorts of other crazy relays and if the campers weren’t actually in the relays, they were all grouped together back at the start /finish line cheering on their club mates was loud as they could. As a matter of fact, you could hear them yelling all across the mountain as they cheered each other on. At the end of the night and after all the toilet paper and shaving cream was out the final results for club points were………Troopers 3rd, Rangers 2nd and the Mighty Mounties 1st!!! I’m not sure how they’re gonna get all that shaving cream and everything else off of them but I am sure they ALL are sleeping well tonight. They didn’t leave anything on the field, they gave it their all!

On a side note, your campers aren’t the only ones that will be worn out tonight. I’m not sure who had more shaving cream on them the campers of there counselors. When I say everyone was fully involved thats exactly what I mean. The whole field was covered with girls young and old that were going crazy for each race. It was great to see the campers get excited when their counselors were going just as hard as they were with all the craziness!

Tomorrow morning our advanced canoeing class will head out early (too early for me!) and head out on a trip to Desoto falls to enjoy a picnic breakfast down at the falls. We’ll send a camera with ‘em so you can see the fun and amazing views as they enjoy breakfast over looking the falls. What a great way to start the day!

Well folks, the campers and counselors are the only ones that will sleep well tonight. I’m starting to battle the sandman right now as we speak. Typing is hard enough for me when I can see the keys clearly, its really tough now that they’re starting to get blurry. Hopefully you guys at home are holding out better than me. I guess thats a sign I’d better cut this one short and head off to bed. You guys go ahead and stay up without me to watch the video and keep scannin’ through all the pics but don’t stay up too late. We still have a long way to go!

have a great night and we’ll see ya tomorrow!