Through the Generations at Skyline... Some Things Never Change

Posted by Frances Lindsey on November 22

My children were third generation campers at Camp Skyline Ranch for girls. My mom was a camper in the 1950’s, I was a camper in the 1970’s-80’s along with my 2 sisters and my daughters were campers in the early 2000’s. There are so many families just like mine that have been and continuing to be generational camp families. We often sit around and talk about the good ole days and reminisce about our glory days at camp and it’s so interesting to see how some things never change over the years.

I’ll start with the clubs. My mom was a Kickapoo which at the time were the younger Mounties. So she set the beginning, undying love for the Mounties as I became the Captain for several years and my oldest daughter became the captain too. We can all sing Mountie songs together and bond over who wrote which song or who could “sing” the loudest. Needless to say my grandchildren will be Mounties one day too. Another big deal at camp that we like to reminisce about is looking for the horseshoe, the golden jewel we search high and low for everyday during the session. It carries with it many points that can make a difference in wining the Point Cup. None of us in our family have found it but a few of us have had the opportunity to hide it. In fact one of my favorite things to do as camp mom is to hide the horseshoe and provide clues. Occasionally my children will help me with clues.

There are so many more camp memories we share ranging from riding horses to the dining hall that I could go on and on and you all would be rolling your eyes. Being a Grandcamper is by far something for campers and camp alike to be proud of. If your mom or grandma was a camper please find me this summer and lets reminisce! 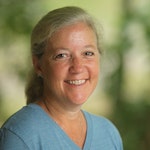