Posted by Larry Johnson on June 17

Hellooooo again parents and welcome back to day 2 of Camp Skyline. Your campers got right to work today after an early morning devotion and then flag raising it was time for breakfast and back for cabin clean up (yes, they get to clean up their cabin and make their beds every morning!!). Soon it was time for their first club meeting where they all learned their club songs, and went over their club strategy for tonights contest of Sock Wars (I’ll tell ya how it went in a little bit). Once all the early morning formalities were over with it was time to get to work in their classes and they got right to it!

All the campers in pottery and Arts N Crafts picked out their projects to work on during the session, Its always fun to stop by there on the first day and then again towards the end of the week and look at how much progress they’ve made. The horseback rings were busy as the campers learned the names of all the horses and then picked out their favorite one to either show what they already know about riding or even start from scratch and work on everything from getting on and off the horse to walking and even trotting on the first day. It was pretty warm but they didn’t mind at all as they made their way around the ring smiling ear to ear (the campers, not the horses, they probably weren’t too fond of the heat but they cooperated well today also).

It didn’t take long for the campers in circus or ropes course to get in the air as they were getting turns on the V swing, tower and out in the circus rings the future acrobats were learning the proper technique for the famed “Penny drop”. Speakin’ of getting into the air, the campers in the Caving, Survival & Rapelling class all got fitted for their harness, helmets and climbing gear. Now its easy to rappel down a rope (and were gonna get plenty of that in the coming days) but these girls learned how to climb UP the rope using a technique called a frog system. They gotta learn how to climb up because when we take our out of camp trips, we’ll start at the top and rapell down and then climb back up several times at each location. It was pretty cool to see their smiles as they realized they were actually making progress in their climbing skills and did a great job today “getting on rope”.

Although the forecast called for scattered storms today Mother Nature never even showed that side of her. We had plenty of sun and fun all day long and the campers took full advantage of it when it came time fir their fun swim classes. You can see for yourself they all were able to find the water slide, blob, and the pool. I think these ladies all found the perfect way to stay cool during the hottest part of the day and it looks like they had a good time doing it.

I got to spend a little time this afternoon with some Riverside Campers in their archery class. This girls were knocking the eye’s out of the bulls eye so I told them it was already time to move the targets back as far as they would go, even on their first day. They moved them back and after a little adjustments, they were pretty close to being able to do it again. It was a fun class to hang out with so I think I’ll stop by there pretty often and see how they’re doin’ each day. I’ll let ya know…

Theres so much more they were doing today, I just don’t have the space or time to write about it. Mountain biking, dance, tennis, set design, sports, you name it they were busy doing it. I know a lot of you have Waldo, but make sure you click the “ALL PHOTOS” button for each sub folder so you can see all the action that was going on. 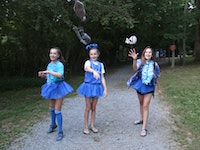 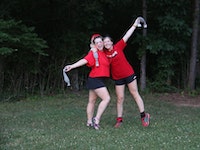 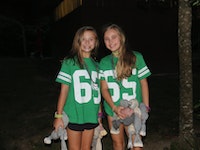 whoops, I’m back now. Sorry, I took a little break to try and help cheer on my beloved Seminoles in the College World Series game tonight…it didn’t help so back to the blog…. A few paragraphs ago I mentioned how the girls were going over their strategy for Sock Wars. well now, heres how it paid off and played out tonight. I explained the concept of the game in last nights blog so I’ll spare ya the details again. (if ya didn’t read last nights blog, well… you missed out but you can go back after you finish this one and get caught up if ya want t play along at home).

Once we rang the bell, you could hear a loud roar from all across the camp as the campers all headed out from their locations in search of the other club’s flag or just some campers painted in other club colors to sling their socks at. It didn’t take long till the air was filled with hundreds of stuffed socks and yells of “charge” were heard all across the mountain as they formed lines of engagement and tried to attack each other’s club area and take their flag. There were socks flying, campers yelling and laughing, reporting back to the scorers table and then doing it all over again. It was the wild west of socks as no one was spared from being a target. The best part was when you would see a mini camper (6-8 year old) walk a group of Riverside campers (13-16 years old) back and make them run just from the threat of twirling their sock like they were gonna throw it at them. To be honest, I’m pretty sure if the mini camper threw the sock, not even the mini camper knew where it was going so it was a pretty good tactic. Anyway, at the end of the night and after all the socks were thrown (and some of their shoulders were probably thrown out) the final results were……………………(ya hear the drum roll in your head yet?)…………. Troopers 3rd, Mounties 2nd and the Rockin’ Rangers 1st! Way to go girls. The Rangers take the first lead in the points cup for the end of the session. Be sure to keep up and see how your camper’s club does throughout the session.

Well, its been a long day, the Seminoles lost, and the blog is finished. I think I’m gonna do just what the campers are doing right now and thats go back to the cabin and check my eyelids for leaks. I’ll let ya know tomorrow if I find any :-)

Y’all have a great night, I’m heading off to bed 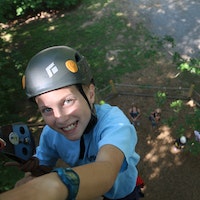 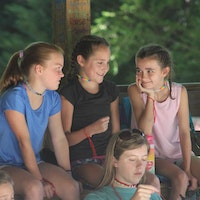