Posted by Larry Johnson on June 16 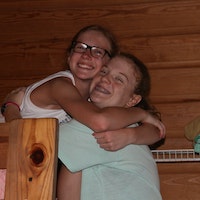 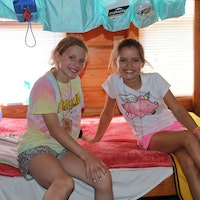 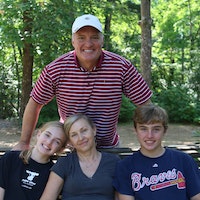 Hellooooo parents and welcome to the camp news, blog, or whatever you want to call it. We’re glad you’re here and were gonna tell ya all about everything that happened today and what’s coming up tomorrow and were gonna do it every night! We want to thank everyone for showing bright and early this morning for check in. Once check in started, it didn’t take long to get everyone in they cabins and all settled in. Can’t say the same for when it was time to go, some of y’all took a little longer to say good bye (and we know who you are!!) but thats OK, you campers’ didn’t waste any time getting to know their new cabin mates and having fun.

Before you guys were back on the interstate, they were running around and playing all sorts of get to know ya games so they could learn the names of all their cabin mates and new friends for the next two weeks. After all the fun in the sun, it was time for club drawings, and class sign up’s.

Now you guys will get a card in the mail in a few days with your campers schedule and which club they’re in and you need to make sure you read it! For staters, you want to know which activities your camper is taking and the main reason (you’ll thank me for this), is you want to be sure you know and remember which club your new camper is in. Once they get into club, they’re in it for life! These girls take their clubs seriously as you’ll see tomorrow night in SOCK WARS (more on that later). They’ll be cheering for their clubs, competing for their clubs and they’ll do everything they can to help their club win whatever activity were doin’ that night. Now heres another tip for ya, if you want to get a quick hint on which club your camper is in, just look at their cabin and club pictures. If they’re wearing a shirt with red on it, they’re a Mountie. If their shirt has Blue on it, they’re a Ranger and of course if they’re wearing green, they are a Trooper. No web sure you make a note of that cause you don’t want to call your camper by the wrong club name. (several family reunions have be ruined by this before, I told ya, they take their club seriously!

After a little camp tour (we don’t want the little darlings to get lost!) and some other activities this afternoon t was time for Cabin Fun Night for tonights activity after dinner. During our cabin fun night we had everything from shaving cream wars, messy twister (with more shaving cream), human hungry hungry hippo, some activity called fish bowl (I probably would’ve know more about it if it was just called “fishing”!!), lots of face painting and the ladies at Riverside took it easy tonight with a spa night and yoga (?) we had campers laughing and yelling all over camp tonight, I could hear them all across the camp as I was walking around watching the activities.

Now tomorrow will be our first day of activities where all the campers will be learning the rules and “what to do’s” of their classes. That won’t take long though as they’ll soon be on horses. ropes course, shooting archery and even up on the circus. Our photographers will be out getting all the pics for ya and even our camp videographer will be out shooting the daily camp highlight video. Make sure you watch it at the end of the blog or you can get a head start by seeing it on our facebook or youtube page (sorry, it just takes me a little longer to type this thing and thats why theres a delay for the blog)

Tomorrow night we’ll have our sock wars where we’ll split the camp into 3 areas and then each club will be assigned an area to hide their flag and then defend it. Each camper will have an armload of stuffed socks (don’t worry mom’s, we supply the socks, they’re not using their own). Once we ring the bell, all the campers will head out to find the other club’s flag, but WATCH OUT!!! If you’re hit with a sock that’s thrown by a camper thats in another club, you have to report back to the scorers table to get back in the game. So try to picture this, hundreds of girls, all decked out in their club colors, faces painted to match their club colors, yelling and screaming, throwing socks at each other and they’re everywhere you look. Got it? yea, its about as easy herding wild cats on a hot tin roof. See, easy…..

well we’ll be out there to get all the action for ya so you don’t miss anything, and I’ll have the final results for ya so you guys playing along at home can keep track of how your campers club misdoing throughout the session.

Well, its been a busy day so I’m gonna head off and try to get some sleep so I can have a chance (not much of one though) to keep up with all your girls for the next 2 weeks (wish me luck!!)

You guys at home be sure to pace yourself so you don’t get burned out on this computer while your camper is here having fun for the next 2 weeks!

We’ll see ya tomorrow night, y’all get some rest, you’re gonna need it (me too!!)