Posted by Larry Johnson on July 06

Merry Christmas Eve to ya parents! Can you believe its been a week already? I was out coiling our ropes from our rappelling trip when I heard some campers up on the ropes course talking. The younger one had asked what day it was and when the older camper said it was Saturday, younger one replied “NOOOOOO!!!!, How can it be Saturday already!!” I just started laughing and shook my head. She really had no idea what day it was but was not happy that a whole week had flown by already. I gotta admit, there are several times when I’m not sure which day it is either. (my calendar up here goes something like: trip day, sock war night, dance night, cabin fun night, etc…no such thing as Monday, Tuesday, Wednesday)

The campers in Cooking class knew exactly what day it was though! Today we had one of our very own alumnus in there as a guest celebrity chef for the day. Allene Arnold was a camper, counselor and head counselor and current Skyline foundation member here at Skyline back in the day (wasn’t THAT long ago). She has worked as a sous chef in New York City for Bobby Flay at Bar Amercain and currently is a food stylist in Birmingham. She stopped by today to help teach the girls in the class how to make homemade Spaghetti and meatballs. Now folks I’m gonna tell ya, this wasn’t any open the pack and take out the spaghetti recipe. They actually made their own spaghetti, sauce and meatballs and for the first time this summer, THEY SAVED ME SOME and it was completely worth the wait!! If your camper is taking cooking class this session you WANT to have them do this meal for you. I couldn’t believe what they created today and you won’t either! Trust me!!

All the campers today were running around decked out in green and red and even some in Santa hats. This may help explain some of the pics you see with campers all dressed in Christmas swag. I guess the clothing helped put them in the Christmas spirit, cause the weather sure didn’t do its part in making it feel like it was Christmas. It was another warm day. 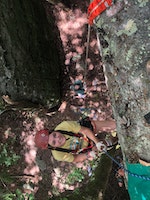 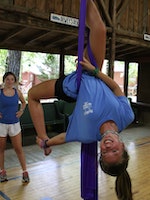 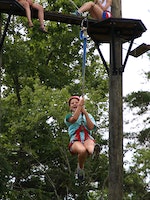 Tonight we had our “Night Before Christmas” where all the campers were in the gym making ornaments, friendship bracelets, coloring and cabin by cabin came into the dining hall to enjoy cookies and milk while watching parts of “The Santa Clause” movie. Of course there was Christmas music playing through the speakers so you could hear songs all over camp. Something new this year, the campers got to hang all their work on our Christmas Tree out in camp. Then we had everyone out there for our big Tree Lighting Ceremony and it was a HIT! Everyone joined around the tree and sang Christmas Carols as we did our usually campfire devotion at the tree after we had the lighting. Charlie Brown would have been proud of how they they decorated that tree and turned it into a Christmas monument. Just see for yourself in the Christmas Eve pics!

Tomorrow (Christmas Day), we’ll have a special day where the staff from the horse barn will ride through camp waking everyone up on horseback yelling, Merry Christmas and then we’ll head to the gym (still in our PJ’s) where we’ll get a visit from the big man himself and several of his little helpers. Santa will hand out presents to everyone in the gym and the counselors will find out who their secret Santa has been this past week. Then its the reading of the first Christmas before breakfast of homemade doughnuts, eggs, bacon, fruit, cereal, french toast and more!

After breakfast, it’ll be time for Sunday school and our camp church service before lunch. After lunch, we’ll have the biggest carnival you can imagine with giant inflatable slides, a dunk tank, face painting, karaoke and more.

Tomorrow night we’ll wrap up the day with the camper favorite, Counselor Hunt. This is where the counselors get dressed up in their best camp and try to keep from being found by the campers that will be looking under every rock and in every trash can to find them and bring them back to the gym to see how many points their worth for their club. Its a long day and the perfect way to celebrate Christmas in July!

Now since it IS Christmas Eve (in July) I always do a T’was the night before Christmas poem, so sit back enjoy the rest and we’ll see ya tomorrow for all the Christmas day details. Merry Christmas (in July)!!!

Twas the night before Christmas and all across camp, the humidity was high everyones clothes were all damp

The stockings were hung by every campers bunk, In hopes that St Nick would leave something on their trunk

the campers were all nestled and snug in their beds, While visions of ropes course and horseback swirled in their heads

With Sally in her PJ’s and I with my cap, Had just settled down for a much needed nap

When out in the camp there arose such a clatter, I stumbled out of the bed to see “whats the matter?”

Away to the windows I flew like a jet, if something was outside, I hoped it hadn’t left yet

The moon had a reflection on the river below, If something was in the water, I just wasn’t gonna go

When what to my wondering eyes should appear, but a miniature sleigh, pulled by some nice looking deer

With a little old driver so lively and quick, I thought I was seeing things perhaps I was sick

More rapid than eagles, he called them by name, No matter who he was this fella had game

First Driftwood and Joywood, Beetlebum, and Bevshack. Then Bar H, Hot box and Brookwood, he toted his pack

Then on to Rosey Den, Edmae and Totem Hall, Then Hillbillies and Deweys Den, he hit ’em all

Then across the river he flew in a snap, He knew his way around he didn’t need a map

Up on the roof of Summerplace he landed, And quickly left them all presents and did it single handed

And then in a twinkling on to Riverside’s roof, He went straight down the chimney, in just a “poof”

As I drew in my head and was turning around, down Riverside chimney he came with a bound

He was dressed in all fur from his foot to his head, I though to myself “he’s gotta be hot, if that was me I’d be dead”

A bag was flung on his back full of toys, it was presents for the girls this trip had nothing for any boys

His cheeks were like roses his nose like a cherry, I hoped for just one present with a name on it for Larry

He had a broad face and a little round belly, He obviously found the dining hall and had some biscuits and jelly

He was chubby and plump a right jolly old elf, I thought when I saw him I was looking at myself

A wink of his eye and a twist of his head,
was a notice to me its time to go back to bed

He stopped by the infirmary to visit our nurses, and left something for them in each of their purses

Then laying a finger aside of his nose, he was finished with his work so up the chimney he arose

He sprung to his sleigh to his team gave a whistle, He took off really fast like a Patriot missile

But I heard him exclaim as he flew above the pines, Merry Christmas to all from Camp Skyline!!