Happy Wednesday to ya parents!! I hope everyone is able to enjoy the cooler weather like we’ve had up here. It was another sweatshirt kind of day on the mountain, but it wasn’t so cool that all the campers couldn’t enjoy a little water fun no matter what class they were in. Of course the girls in canoeing had the water, but today they had SPLASH OUT where the main goal was to try and get as much water in the other peoples canoe as possible. Of course the easiest way to accomplish that goal is total over their canoe! When ya look through all the pics from today you’ll see several of them found out that secret and it loos like they had fun doing it too. Of course everyone ended up playing in the waterfall under the dam by the end of the period.

Even the campers in tennis class got into the water action with an activity full of water balloons and some duck, duck, pour a cooler of water on you! Everywhere you looked there was water balloons be launched in almost every activity around camp. I guess thats kind of a tradition, but really, today we didn’t need the water wars. It was another crisp morning, cool day and once more, sweatshirts were the dress of the day. No one complained though, it was really nice.

As all the campers were getting their last runs on the zip line, waterslide, or even their last turns on their favorite horse, our rappelling class was out of camp getting some vertical on rope which os what we trained for all session long. Everyone did a great job and enjoyed putting their newly learned skills to the test as they rappelled over the rock edges and then climbed back up the ropes to do it again and again. I’m glad they did such a great job at it, ‘cause tomorrow we’ll head to the Alabama side of Lookout mountain and try it again on some larger cliffs with spectacular views. Those pics will be up a little elate tomorrow but they’re worth the look when you get a chance. 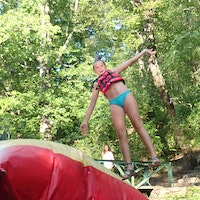 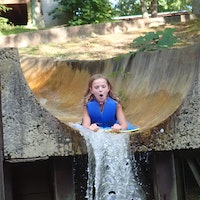 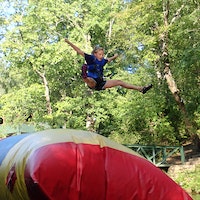 Tonight we were all treated to a fantastic performance from our musical theatre class as they presented Mary Poppins. They’ve been working hard every day and even during rest hour to make sure they know all their lines and positions for the play. All that hard work paid off as they knocked it out of the ball park with tonights show. The campers enjoyed the play and even gave them a long “standing O” at the end for their efforts. It wouldn’t have been possible though without another class, set design. Those campers have been working hard too all session long putting together the costumes and backdrops for the show. It all came together just perfectly and looked great, as amateur of fact, it all looked……supercalifragilisticexpialidocious!!

Speaking of tomorrow, we’ll have our Showtime at Skyline where everyone in our gymnastics, dance, circus and flag and baton classes will be able to show what they’ve learned all session long. Its great to be able to see what all these girls have been working on and how well they do after only 2 weeks!

We’ll also have our Grand Championship horse show where the winners of todays horse show will compete for the Horse Cup that goes to the club with the winner. All of camp will be there to watch and see who take home the prize. We’ll have our photographers there too so you guys at home can see just as soon as they get the pics and get them posted. After a full day of everything I’ve just talked about its time to wind things down and have our end of the summer banquet. This is where it starts to get serious and all the campers realize their time at camp is coming to an end. After they announce the honor campers and counselors, they’ll tell everyone which club won the Horse Cup, the points cup (Thats the reason that take all these nighttime activities so seriously, they’re playing for keeps!), and the Eloise H Temple Spirit cup. Its a hugs deal to these girls which club wins these cup and they’re awfully proud when they hear their clubs name called. I don’t blame ‘em, they’re been working hard for this honor all session long.

And then….. reality sets in. The camp time is nearing an end. Some of their best friends, we might have been strangers 2 weeks ago will be going back home to possible a state or two away. Theres a special bond between camp friends who have helped each other reach what seemed to be unattainable goals. Who competed against each other tooth and nail for the right to be sock war champion, who have cleaned their cabins and rooms together in hopes of wining the clean cabin award each day, and those that have sweated together in a common goal of helping their club or another camper. These girls realize start to realize that the ropes course, circus, canoeing, you name it… are all just tools to help them learn how to work together and celebrate each others success.

There won’t a dry eye in the dining hall as they realize this time is coming to a close. If I could find a way to get the whole thing sponsored by Kleenex I could retire! It really is a special time though and the pictures you see of the tears are real. Its amazing to see how important their time together is to one another and the pics won’t even come close to doing the moment justice.

After banquet, it’ll be time for all the clubs to head to the river as we have river vespers where the counselor choir will paddle down stream, by the light of only their torches and singing songs from camp. As moving as the end of the banquet is (and thats no joke), the most moving time to me is when the age out campers give their age out speech to the whole camp. This is when these young ladies will come to the podium and present a speech some of them have been working on for weeks if not months. After all the “professional speakers” that tend to grab the news these days, its refreshing to hear someone speak straight form the heart and talk about what their time here has meant to them. There’s no one on TV that could present a more moving and heart grabbing speech than your campers. Its honest, its real, its emotional and I sit in awe every year just listening to the mature speeches that come from these young ladies and am honored to be part of what they hold important in their heart.

Well, its late, I’m tired, I know you must be too. I want to thank everyone of y’all that have joined in each night or morning to see what your campers have been up to. Its been a pleasure to get to bring their time at camp to you through my eyes and stories. I hope you guys have enjoyed it as much as I have and I look forward to seeing y’all on Friday morning at check out. Please be careful on your way to camp, I know your campers will glad to se you (although some of them may not be happy to be leaving…).

So thanks again for letting us have your most prized possession here at Skyline for the past 2 weeks. Its truly been an honor to get to play and grow with them while they were here. 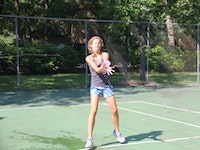 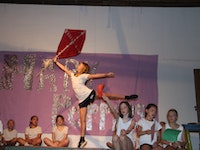 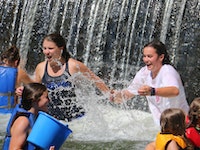 Another cool day up on the mountain and a great way to end the activities. Music Credit to: Atomic Kitten