Posted by Larry Johnson on July 10

Well hellooooo again parents! I hope you guys playing along at home haven’t been as busy as your campers have. They let no opportunity go past them as they took in every chance they had on all the activities today. Throughout the day it was easy to see they had adopted the theme of “water balloon” Wednesday to todays list of things to do. It seems every class had an abundance of water balloons to let each other sling at everyone. It was a nice addition to the action as they were bombarding each other all day long to help keep cool.

One activity that didn’t need any water balloons was fun swim. I told you there was gonna be a lot of action down at the waterslide and if ya look through todays pictures, you can see some great shots of the girls flying out the slide down to the river below. Some enjoyed and some were surprised when they exited the slide. I’ll let you see the looks on their faces and decide for yourself which ones were which. It ain’t hard to tell!!!

Today up in the equestrian arena our campers were competing in the horse shows all day long and todays winners will compete in the Grand Championship tomorrow. This is a big deal and the whole camp will be out in full force to watch and cheer on their favorite. Of course the winner will most certainly take home the HorseShow Cup to their club tomorrow night at banquet. We’ll have pictures up all throughout the day so you can check in and see for yourself who the winner will be.

The ladies in Caving and rappelling class got to play a little today as we ascended up a rope to outside the 3rd floor of Pickles Palace and once there they performed a change over to another rope and then traverse rappelled across the waterslide down to the bank of the river. Whats more impressive is the fact they did all this while still in their harnesses and up about 30 feet in the air. Their hard work these past 2 weeks will pay off tomorrow when they take their last out of camp trip to the Alabama brow of Lookout Mountain and spend the day doing their last rappelling and climbing on cliffs that range from 50 to 110 feet high. To top it off, we’ll have a view of about 40 miles and be able to see Alabama, Georgia, and Tennessee the whole time were playing.Even if you don’t have a camper in that class, be sure to check out the pics just for the view, I promise ya it will be worth it!

Even though there won’t be any classes tomorrow, the day will still be packed with plenty of things for everyone to do. We’ll start off will club meetings and then everyone will go watch and cheer on their club riders in the Grand Championship. After that it will be time to cool off at Beli Deli. After a nice pic nick lunch on the grounds it will be time to do a little packing and then everyone will get to enjoy Showtime at Skyline where all the campers that have been in dance class, flag and baton, gymnastics and even circus will get to perform for the whole camp and show what they’ve learned this session. Its a great time to see how much everyone has learned and its impressive that they put it all together in just under 2 weeks! 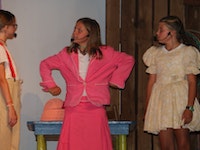 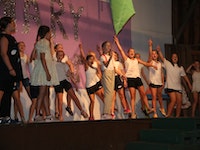 Speaking of being impressed, you guys should have seen our Cabaret tonight as our musical theatre class was up on the stage and performed Mary Poppins for everyone in the gym. I couldn’t believe what all those girls had to memorize. The lines, their positions and dance routines. It was incredible how they put it all together. Theres a special folder of pics so you can see your camper up on the stage. Not only did they have to learn everything they did, they did the whole thing with those cheeky English accents. Its one thing to memorize your lines and where to be, but to do all that AND do it while trying to imitate Julie Andrews and Dick Van Dyke (ok, his English accent wasn’t the best… I admit it, our ‘Bert” may have been even better than the original) was impressive.

To top it all off, we had some great costumes, props and backdrop all provided by the campers that took set design this session. It was a culmination of a lot of work that all came together for a performance that was practically perfect in every way, as a matter of fact, you could say it was “supercalifragilisticexpialidocious”.

After everything concludes tomorrow it will be time for our end of the session banquet where we’ll announce the winners of the 3 cups the clubs have been competing for and then we’ll wrap up the session with river vespers where we’ll bring all the competitions to an end. For the first time ever, I’ll be back one more night to tell you about how emotional those last moments at camp are and maybe I’ll even give ya a heads up on which clubs won the cups or even honor camper. Tomorrow night will be a VERY emotional night as these girls all start to say good bye to one another and realize their time at camp this year is coming to an end. It’s one of the easiest and most difficult blogs to write as I get to describe the look in each campers eyes and on their face as they say good bye to one another. If you haven’t read any of the blogs this year and you’re reading this one for the first time you want to come back tomorrow and see how much camp and camp friends mean to these girls. If I were you, I’d bring a box of kleenex, it’s got nothing to do with my writing “skills” (or lack of) but its just straight from the heart about what I see in your campers and the changes they’ve had during their time here.

You guys get some sleep, you’ve almost made it though the whole session and I promise, I’ll be back a little earlier tomorrow night so you can get the scoop before you head off to bed.

Y’all have a great night, I’ll see ya back here in a little while……..

Today was the last day of activities and the Cabaret. Please say there isn't just one more day. Music Credit to Charles Wright 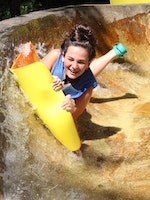 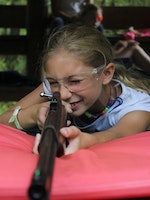 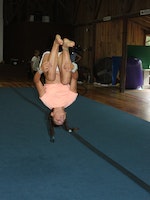