Posted by Larry Johnson on July 08

Happy Monday to ya parents and what a Monday it’s been! Before I go to far I need to thank our camp Mom, Frances Lidnsey for writing the blog last Friday for me. I enjoy reading about what she see’s as much as you do. It’s always nice to hear about things that happen in camp that I didn’t see that day and I liked her angle on it, “From a Mom’s eye”. It made me think, what if I wrote one from a Dad’s eye……. pretty sure it would go like this…

Some of the girls went rafting today and some other ones went caving. The rest stayed at camp and now they’re all watching some movie up in the gym. The end.

Man, I’m starting to like the look of that format, what ya think??

Don’t worry, I’ll give ya the real scoop with all the details, but seriously, that would be the whole conversation between a group of guys. 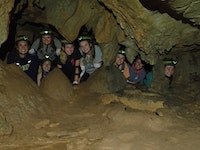 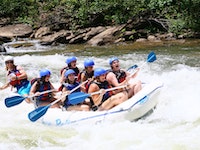 And now… thaaaaa REST of the story

We did have some campers head off to the Ocoee River today and they had a great time challenging the rapids and cold water on the river. You could tell they used a lot of energy on the river cause when the buses pulled back into camp tonight, everyone of them was fast asleep enjoying the air conditioning and smooth ride.

Pretty much the same entry into camp for the campers that went caving today. They spent all day underground exploring Howards Waterfall Cave in Trenton Ga and we had a great time. I’ve never had campers wanting to explore every nook and cranny of the cave like they did, but they found everyone and checked it out. We even had lunch about 100 feet underground in a cool 57 degree “private dining area” (and by that I mean no one else was in the cave with us so it was nice and quiet). One of the highlights for everyone was the campers were amazed at how dark it got when all the headlamps were turned off so on the way back out after lunch, they asked if we could turn them off again and have a “rest hour”. Well, who am I if I don’t try to make the campers happy so we cut the headlamps off and took about a 30 min nap in the cool, dark confines of the cave. They said it was one of the best rest hours they’ve ever had while they’ve been to camp. I’d have to agree with them. Even though we didn’t see anyone else in the cave, they did manage to find a friendly salamander or two for them to pose with in the pictures.

Now the rest of the campers apparently really enjoyed the blob, circus, rifelry and all the other activities. One class that had a few extra people in it was cooking class. It seems that some classes had a large number of people out due to the trips and the remaining camper or two in there went with their counselor and checked out what was baking in there today. (can’t blame them for migrating there!! Pretty sure thats where I would have gone if I was back at camp today). One good thing about the rain we’ve had recently is its brought the water level in the river up to where we can get back to playing on the waterslide. I’m sure you’re gonna see some great pics in the next day or two from there. 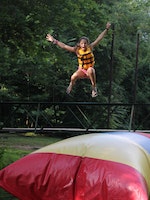 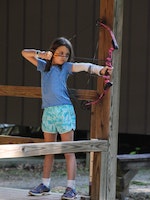 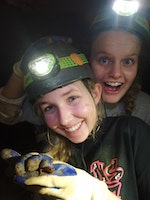 Tonight everyone came to the dining hall in their PJ’s ready to eat and then enjoy the movie. As soon as everyone finished, they headed up to the gym, grabbed their personal bag of popcorn (no one really likes to share popcorn at a movie) and set up their pillows and sleeping bags to enjoy the movie in the cool night air. Or at least that’s the plan… As I was up there getting the pics before the movie started, most of them had already settled in and gotten comfortable and to tell ya the truth, I’d be surprised if they made it through the opening credits. For those that were able to stay awake, they were treated to “The Parent Trap”. A perfect choice for campers to see. (for those few that stayed awake) 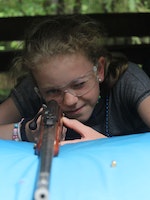 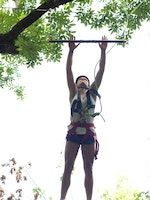 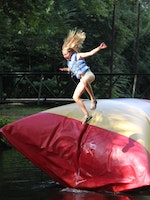 Tomorrow will be another day of activities and then we’ll crank it up a full notch tomorrow night with our version of the wildest, craziest, wackiest relay races you’ve ever seen…. SPEED CHALLENGE!! The campers will be split into their clubs and each club will compete in a series of 10 relays that run back to back to back to back (you get the point). As soon as the first race is finished the next one starts. The crazy part is that is all just for one age group of campers until they finish all 10 relays. Then we’ll reset everything and do it again for the next age group of campers, and then the next, and the next, and the next. all in all there will be 60 races run as fast as you can and if the campers aren’t competing in them, they’re cheering each other in their club on as loud as they can. So there’s no break when they’re excited and cheering. I told you it was “a wild and crazy” event.

We’ll be out there again tomorrow so be sure to check back and see all the pics and see what I’m talking about with Speed Challenge.

Well, like I said, I was on the caving trip today and some (ok, all) of those campers fit through the tight spaces a little (a lot) easier than I do so I’m more tired than any of them right now! Its time for me to head over to the house and take a dose of “vitamin I” (ibuprofen) before I fall asleep here at the computer.

you guys have a great night and I’ll see ya back here tomorrow!

There is no case of the Mondays here at camp! Music Credit to Beyoncé