Posted by Sally Johnson on December 16

I hope all of you are doing well and enjoying the Christmas season. This time of year always has me reminiscing. I think about several things, but today I want to share with y’all some of my favorite Christmas memories with my family. If they were here right now, they would be rolling their eyes.

Some of my favorite Christmas memories are of my children. Abby’s third Christmas she received an easel, which she called a weethal (she had a lisp), paints and a refrigerator box. She painted every inch of that box (as well as herself) and took a nap in it every day. She equipped it with many blankets, pillows and stuffed animals. It didn’t matter she had a playroom with loads of toys in it, she wanted the box. It was simple and she loved it. When the box started to cave in, duct tape saved it for another few weeks. We kept it up as long as we could but soon it had to go. What a great gift, she loved it!

Luke was 7 months old his first Christmas. Unfortunately, the little guy was sick but once the Tylenol kicked in he was good…..for a little while. At 7 months not really knowing anything about Christmas and why we had a tree and presents under it he still enjoyed himself. If your house is anything like mine, when opening presents there is wrapping paper and boxes all over the floor. Luke took advantage of that and rolled all over the den in the paper. He would roll himself up in the paper then unroll himself or cry for help. He loved the sound and the feel of it, true joy out of something very simple.

We have also had several Griswold Christmas’. Our fully decorated tree has fallen over before! The amazing thing is, none of the ornaments broke!! I’m pretty sure Luke caused it, but still don’t have confirmation on that. It was at least 12 years ago when this happened and I am still trying to get to the bottom of it. I have come to the conclusion that I may never know. Christmas day, for us, can be so messy with paper and boxes everywhere. We have even thrown a gift or two away….. except for one Christmas. That particular Christmas we talk about every year, now with laughter! I won’t go into detail however, it involved Larry mistakenly throwing away ALL of the Christmas presents. Nothing was left behind!

On a much brighter note, Larry proposed to me one Christmas afternoon. We had already opened all the presents and were sitting around talking when he came into the den to announce there was something left in the tree that had my name on it. It was an envelope that had a clue. I had to solve the clue to get the next envelope, a scavenger hunt ensued! I had twelve clues to find and solve. These clues took me from the attic to the dog house and every where in between. These types of scavenger hunts have become a tradition in our home for Christmas. They don’t happen every Christmas, but they do happen most of them. It’s something our entire family looks forward to. What are your favorite Christmas memories? Take some time this season and remember. Most of all take this time to remember what the Lord has done for us, sending his son to us in human form, a baby, to save us. Ultimately, that is enough for every Christmas in history!

Sally is a Rome, Georgia native and started attending Camp Skyline in 1977. She loved the camp experience so much she wanted to give back, so she became a counselor. In 1997 she and her husband Larry purchased camp and haven’t looked back! 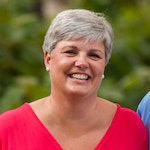