Cabaret and final day of classes

Posted by Larry Johnson on July 30

Hellooooo parents! Can you believe today was already the last day of classes. This session has flown by so quickly (I know it may not seem that way for some of you first time camp parents who might have gotten a little “camper sick” since your camper didn’t get home sick!). I was watching tonights video (yep, its already on youtube and on our “My CSR” link) and I couldn’t help but notice how much quicker the campers were making their way up the climbing tower and with a great big bag of confidence to boot. If you don’t know what I’m talking about, go back and look at some of the day 1 or day 2 videos and then watch tonights video and see if you don’t see a completely different mind set on them as they do what only two weeks ago seemed impossible.

I gotta admit, the elements are fun but the best part os always seeing them grow each day and gain that confidence and watch it cary over to other aspects of their camp life and then when they get home. I know you guys will notice when you see them on pick up day. That even happens in activities like arts and crafts where today i happened to walk past a group of campers heading up the hill form the building headed to their cabin. As I was talking to them from 20 yds. away, one of the younger ones hollered out, “you wanna see our projects?” Well of course the obvious answer was yes, and as soon as I got to them they each took turns showing me their finished bowls that looked like giant leaves, a ring stand, cups, dishes and more. When I told them I had written about how they took the clay and molded it into these pieces of art, they were happy and went into even more detail about how each one was made (some for hem just repeated what they had just told me…..several times… but I didn’t mind. They were pumped to know their class had made the Roost and they were even more proud of their projects they’ll be showing you when you arrive. I know you’ll be surprised too.

Thank goodness the weather today wasn’t quite as warm as some of the other days and every camper was getting in their last rides of the session on their favorite horse, ropes course or circus element, you get the idea. But the favorite activity of the day by far was the blob on the waterfront. You could tell getting the perfect blob on the very last day “just means more” (sorry SEC, I had to do it). here was aline of campers and you could hear them all across camp each period with oooohhhhs and aaahhhhhhhs just like on the 4th of July. Of course these cheers were soon followed by the sound of a large splash and a lot of people laughing or cheering.

One of the benefits of having our rope climbing gear stored close to the gym is I get to hear our chorus and drama do their final dress rehearsals for tonights Cabaret. It was a collection of “the little mermaid” songs and they were right on key as they worked on every song. I can tell ya, they saved their best performance for their last, as tonights show in font of all the campers was even better (if that’s possible). Just another example of that confidence I was talking about before and this one was just as fun to watch as they sang their little hearts out up on the stage in front of the whole camp. How they had the courage to get up there and dance and sing in front of everyone is beyond me but they knocked it out of the ball park!

Tomorrow we won’t have our normal activities going, but there will still be plenty of action around camp. We’ll let everyone sleep in a little later for starters (I kinda like the way this is heading!!) and then after breakfast it will be time for the final cabin clean up. (yes mom and dad, they have been cleaning their cabin and making their beds every single day they’ve been here!). After that it will time for the Grand Championship as all the campers will come to the riding rings to cheer on their favorite rider or their club. They had the preliminary rides today to determine who would be competing in the Grand. Winning the Grand is a big deal and really helps your club want the horse cup at tomorrow nights banquet.

After the Grand, it’ll be time for belt deli and then club meetings before lunch. The best (still) part of the day is next with a shorter rest hour and then its time for the campers in circus, gymnastics and dance class to step up and give their final performance for everyone during Showtime. 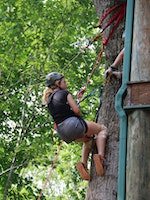 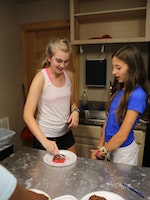 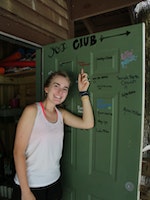 At the end of the night we’ll have our final banquet where all the winners of the cups will be announced as well as our honor campers and counselors. We’ll also honor our campers achievements in each activity as well as the camp toast to the club and activity leaders. When they announce which club wins each cup, our dining hall goes form “semi loud” to “sitting in front of the speakers at a concert as they campers cheer their clubs and club members accomplishments. And then…… the hardest part of camp to write about…. when all the campers realize their time at camp is drawing to an end and some of the best friends they’ve ever made will be all heading home, possibly several states away.

As the banquet comes to an end they eyes start to get a little watery (could be allergies?), the laughs are replaced by hugs and tears and reality sets in. The time with their cabin mates and friends they’ve had for the last 2 weeks is almost over. All the friends they’ve competed with and against, cheered on to new personal best in all the activities, supported as they were performing, sweated with during the summer heat, will soon be leaving. Those feelings will start a water flow of tears that Kleenex couldn’t stop even if they sponsored the event.

After all the “good byes” and “I’ll miss you’s” its time for everyone to head down to the river for the final event of camp, river vespers. This is where we’ll hear each cabin wish and then a short speech from our age out campers. This is one of the most moving moments at camp. Its not about what they did in arts and crafts, on the ropes course, the cooking class this summer. These ladies will stand at the podium and read a speech that some of them have been working on for months about what their entire time at camp has meant to them. I gotta tell ya, after hearing all the politicians speak for the last year, It will make you see the world from a whole new perspective when you hear an honest, sincere speech thats right from the heart and is delivered with such emotion you can’t help but to have an allergy attack of your own if ya know what I mean. These ladies stand their speaking about everything that’s impacted them over the years and encouraging the younger campers to take full advantage of every day here. To top it off they do this while in the back of their minds, they are in their final night, forever, as a camper. I can’t ever do the emotion they show justice, its something you have to see, hear and feel to fully understand. I’ll tell you this though, be proud of your campers, they’ve earned it and they deserve it.

Folks, its been a blast to get to keep all y’all that have been playing along at home, in the loop as your camper has been here with us for the past 2 weeks. We can’t thank you enough for trusting us with your most prized possession and especially this year with everything thats going on in the world. Its been our pleasure to have them here playing and growing during this time.

Please be sure to stop at the office on Sunday and say hi (especially if you’re one of the ones thats been reading the Roost). I’ll be easy to spot, I’ll be the one that looks as tired as all you that have been up late each night reading these blogs.

Have a safe trip this weekend, thanks again and God Bless

Y’all have a great night,