Well howdy parents and welcome back to the roost. First I wanna thank Gene for covering the Roost last night. I felt like one of you guys playing along at home, first thing I did this morning when I woke up was grab my phone to see what she wrote about, and yes, I was surprised at some of the things she saw that I don’t see every day.

One thing I saw today was a bunch of campers who were completely at home with all their activities and friends. As I made my way though camp this morning all I could hear was yells of encouragement from campers to their friends. Whether it was on the climbing tower, circus, ropes course or even at rifelry, they were celebrating each others success in everything they were doing.

One thing that happened yesterday for the first time was a camper found me between classes and let me know she had saved me one of their treats they made in cooking class!! I’m not gonna lie, it was delicious. They had made pepperoni rolls in cooking class and it just melted in my mouth when I took a bite! If your daughter is taking cooking class at camp, you’re gonna be in for a big surprise when they get home if you can talk them into showing ya what they learned!

Now back to today… Like I sad, the ladies were all encouraging each other in their classes and you could see the campers grow with confidence as they mastered each challenge with their friends support. Speaking of growing confidence, the ladies in the CSR class went on their first out of camp trip this afternoon and when they first started out rappelling down and climbing back up the rock wall, you could tell they were cautious. By the time they had made several trips up and down the ropes, they were moving like a well oiled machine. To be able to see them expand their comfort zone and work in their “growth zone” was amazing as they just got better and better with each time on rope. There are some great pics of them out on the cliff so be sure to check them all out, you’ll be surprised at what your campers are doing. 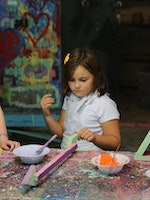 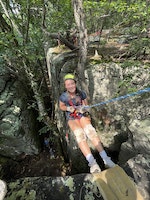 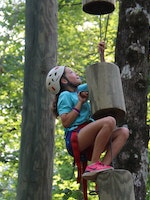 As much as I love the adventure activities, I’m always surprised by the talent I see in arts and crafts and pottery. These girls take a blank sheet of paper and turn it into a beautiful painting or drawing. In pottery, they way they take a lump of clay and work into a flat slab and then mold it into whatever they had visioned in their mind before they started is something I just can’t wrap my mind around. Since were 4 days into camp some of those paintings, and moldings are starting to take shape (no pun intended) down there and its great to walk through and see the progress they’ve made. As I walked through today their visions are becoming clear (even to me!) as I see nice cups, plates or bowls that are getting ready to be put in the kiln. It arts and crafts, what were blank wooden birdhouses or wind-chimes are now colorful collections that have a completely different look than they did just a few days before.

Its always about this time of the session when I get to enjoy the progress everyone is making no matter what activity they’re in. Heck, even the girls in swimming class are starting to master the perfect jump on the blob to help their friend who are siting on the other end get the as much air time as Shawn White at the X games! Now thats something thats REALLY fun to watch!!

With the warmer days, the water front has been a busy place. Campers are finding all sorts of ways to get into Little River or the pool. While the blob is always one of their favorites, the water slide, flying down the straight away and then up the sides on the curves before getting shot out into river has to at the top of their list. Talk about growing in confidence, its so much fun to watch the ones that might be a little scared of trying the slide at first, after just a ride or two down, sprinting back up the hill to see how many more times they can go before the class period is finished. I guess if you’re gonna get better at something, you might as well have fun doing it!!

Tonight we played “Candy Crush” for our nighttime activity. Now this isn’t the same candy crush a lot of you guys at home play for hours on end on your phone. In our version, the cabin groups have to move around camp from counselor to counselor completing wild and wacky task trying to earn a balloon with a hidden point value inside. Some of the strange things they had to accomplish to get their balloon include, singing a song as a group, imitate falling leaves, group push ups and even answering questions about last nights campfire devotion.

But there was a catch, (theres always a catch…). several groups of counselors were bandits who would pop one of the groups balloons if they failed to complete their task so they would have to go back to the original station and regain another balloon and then try to avoid the bandit counselor the rest of the night.

Once everyone had their balloons they all came back to the gym and got to pop their balloons and see how many points were waiting for them inside. Once all the popping was over, the wining cabins were……….

One thing was certain, the campers enjoyed their crazy task as they made their way around camp acting silly and enjoying every second of it!

Well, its about time for me to go check my eyelids for leaks (I bet I don’t find any if y know what I mean!!), you guys stick around as long as you want and enjoy all the pics and video, I’m gonna head on off to bed, but like motel 6, we’ll leave the light on for ya!!

Have a good night!!