Posted by Larry Johnson on July 11 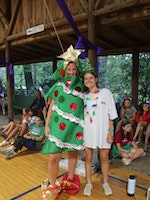 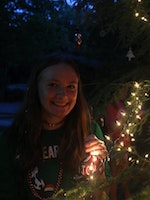 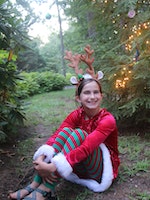 Well howdy parents and welcome back to the Roost and do I have some exciting news!!! It Christmas Eve!!! No, the heat hasn’t gotten to me (as far as I know), it really is Christmas eve (at least up here at camp)! See, 3rd session is always our “Christmas in July” session and this year is no different. All the campers have been in the Christmas spirit. You could hear them singing Christmas songs all day around camp. People walking around saying “Merry Christmas!” for the last couple days and even the girls at ropes course were using Christmas songs to signal they were about to come zipping by across the field. It really is just like Christmas up here (except for the heat and humidity, but hey, you get the idea). Everyone was in full Christmas spirit all day as they made their way from class to class.

Earlier today our caving, survival and rappelling class made their first out of camp trip today and everyone did great. Be sure to check out their pics and you’ll see a lot of smiling faces as they made their way down and up the rock face this afternoon.

Right now, its night time and all the campers just finished our “Santa’s workshop”. They’ve been in the gym making all sorts of Christmas ornaments for our camp tree, popcorn lacings, stained glass windows, face paintings of Christmas themes and more yule tide spirit!. We even have a station in the dining hall where the campers get to come, in their cabin groups, in and enjoy some cookies and milk (ya gotta have cookies and milk on Christmas eve….. and yes, we’ll leave some out for Santa tonight too!!). While they’re enjoying their Christmas treats, their also got to watch “The Santa Clause” on the big screen. Its perfect combination of sweets and treats for everyone in anticipation of Santa making a stop by here tonight to deliver some treats himself!

Now I have it from a very good source that this will actually happen! I’d take the bet that tomorrow morning we get to see the big guy himself here at Skyline with something for all the campers. As a matter of fact, my good buddy at the Weather channel, Jim Cantore has been texting me saying there was an unusually strong cold front that has dropped out of the north and is headed straight for camp! You’re not gonna believe this, but he said theres a 100% chance we have a white morning tomorrow when everyone wakes up!! Can you imagine that, all the campers waking to a white Christmas?!?! Hey, it could happen!!

Theres a lot going on tomorrow starting with everyone finding out who their secret Seats is first thing in the morning, followed with breakfast and then church and a huge festival in the afternoon. Theres so much, I’ll have to get yall caught up to speed in tomorrows letter.

Since it is Christmas eve and it appears everything is lining up for us to have a significant change in the weather for the special occasion, I thought I’d go ahead and write a little Christmas poem to finish out the night. You guys have a great night and don’t say up too late, or you know who may not come to visit. Were not taking any chances up here!!

Twas the night before Christmas and all across camp
the humidity was high, everyones clothes were all damp

With Sally in her PJ’s and I with my cap,
Had just settled down for a much needed nap

When out in the camp there arose such a clatter
I stumbled out of the bed to see “whats the matter?”

Away to the windows I flew like a jet
if something was outside, I hoped it hadn’t left yet

The moon had a reflection on the river below
If something was in the water, I wasn’t gonna go

When what to my wondering eyes should appear
but a miniature sleigh, pulled by some nice looking deer

With a little old driver so lively and quick
I thought I was seeing things, perhaps I was sick

More rapid than eagles, he called them by name
No matter who he was, this fella had game

First Driftwood and Joywood, Beetlebum, and Bevshack
Then Bar H, Hot box and Brookwood, he toted his pack

Then on to Rosey Den, Edmae and Totem Hall
Then Hillbillies and Deweys Den, he hit ’em all

Then across the river he flew in a snap
He knew his way around, he didn’t need a map

Up on the roof, of Summerplace he landed
And quickly left them all presents, and did it single handed

And then in a twinkling, on to Riverside’s roof
He went straight down the chimney, in just a “poof”

As I drew in my head and was turning around
Down Riverside chimney, he came with a bound

He was dressed in all fur from his foot to his head
I though to myself “he’s gotta be hot, if that was me I’d be dead”

A bag was flung on his back full of toys
it was presents for the girls, this trip had nothing for any boys

His cheeks were like roses, his nose like a cherry
I hoped for just one present with a name on it for Larry

He was chubby and plump, a right jolly old elf
I thought when I saw him I was looking at myself

A wink of his eye and a twist of his head,
was a notice to me, its time to go back to bed

He sprung to his sleigh, to his team gave a whistle
He took off really fast, like a Patriot missile

But I heard him exclaim as he flew above the pines
Merry Christmas to all, from Camp Skyline!!