Posted by Larry Johnson on July 07

Good morning parents! I know I usually start off with something a little different than “good morning” but today I thought I would actually try something……”a little different”. Instead of waiting until after the day is over before I write the Roost, today I’m writing it all throughout the day. We’ll see how it goes…….

Just a few hours ago the campers woke to a gentle rain (why anyone would want to wake up when they can hear the sound of rain on their tin roof is beyond me……). It wasn’t that much rain and it didn’t stop us form having our morning devotions. Although instead of meeting in morning watch, we decided to meet in the dance hall just so no one would be wet to start the day off.

After breakfast, it was straight to cabin clean up (yes moms…. they clean their cabins and make their beds every morning while they’re here!!) and then it was time for their activities. They didn’t waste anytime getting straight to their classes and they must have listened really well, ‘cause it wasn’t very long at all before I saw campers up on horses, on the ropes course and even on the circus. The campers in arts and crafts and pottery were busy learning about and picking out their different projects they want to work on this session.

Its lunch time now and they’re all enjoying some of the best meatloaf, macaroni and cheese, fried okra, rolls and an incredible brownie dessert that just melts in your hand. For those of y’all that might be worried that I’m in the office writing this instead of grabbing lunch, don’t worry, I made my way during 3rd period and had a nice quiet lunch with the ACIT’s (its MUCH quieter eating with them instead of waiting until everyone gets in there.

Well you’re up to date on the first half of the day. I have to get ready to teach my caving, survival and rappelling class this afternoon, but I’ll be back after that with how the day went. see ya in a few!

OK parents, I’m back. I’ll admit its a little later than I thought it would be. Rule number one when running a girls summer camp….. always expect the unexpected. Of course there were several “small things” that came up I had to detour and take care of, but I never stopped taking notes about what was going on in camp. here we go!!

This afternoon proved to be much like the morning, campers were doing much better than expected on every activity I saw. In our rappelling class, everyone actually went up the rope 4 or 5 times, thats extraordinary for it being their first day. I know, some of y’all though ya caught me in a typo when I said the campers went “UP” the rope (although theres probably plenty of other typos in the Roost, that ain’t one of them). Our campers learn to rappel down the rope but then we also have to be able to climb back up the rope to get out of where ever we just rappelled into. Thats a lot of work to go back up a rope and the girls did fantastic learning how its done today. I saw the same progress from the girls on the climbing tower (some of them already reached the top today!) as well as their first day on the ropes course. 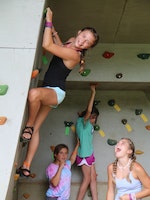 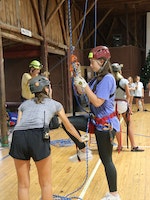 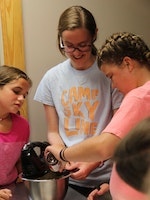 Speaking of fantastic first days, its unbelievable I’m reporting to ya that the Mounties have already found the golden horseshoe that is hidden in camp. There I was enjoying a challenging game of corn hole with a couple of campers during the afternoon bell deli when all of a sudden I heard a high pitched scream saying ‘I FOUND IT!!!!” My first thought was “where is their corn hole etiquette? I was just about to make any toss!!!. But then everyone around us realized it was a very small and young camper that was standing off to the side with the golden horse shoe hoisted above her head. It didn’t take long after that for all the other Mounties to come charging in and yelling (again…. these girls have GOT to learn some corn hole etiquette) and celebrating by ringing the bell to let all the other campers know their club has taken the early lead in the points cup. Whether they interrupted my toss or not, congratulations Mounties!!!!!

Tonight we had the camper favorite Sock Wars! This is where each camper gets an arm load of stuffed socks and heads out to their section of camp to hide their flag. Once we ring the bell, its all out war and every club for themselves as the girls head out in search of campers in other clubs and their flag. If they see a camper in another club the sock war starts and if your hit with a stuffed sock you have to report to the scorers table to get back in the game. I gotta tell ya, I was witness to one of the best sock war battles of all times tonight between the Troopers and Rangers. I mean, this was one our grand kids will probably be reading about in the history books years from now. It was a never ending charging wave after wave of campers battling for some ground with hundreds of socks being thrown at each side. I’m sure there will be some sore arms after this one. Be sure to look through the pics and you’ll be able to see some of the pics I got during this monumental battle.

As good as that battle was, when the battles were over and the points totaled up, the file results were……….. do ya hear that drum rolling in your head…… I thought so! The final results were, Troopers 3rd, Rangers 2nd and the Mighty Mounties in 1st!!! Way to go girls. After finding the horse shoe AND winning sock wars, they racked up some major points early in the session!

Tomorrow should be a fast day as everyone now knows where and what they’re doing for their classes. and since we’ve had such a busy 2 days so far, were gonna slow things down a bit tomorrow night and let everyone get their legs back under ‘em for a little while. We’ll have some of the best talent on the mountain up on stage as we have talent night and all the campers will get to gather in the gym to sit back, relax and enjoy the super show!

We’ll be right down front to get all the pics for ya so just hang in there and we’ll bring them to ya just as fast as we can.

Before I forget, emails to camper will be printed out at 9 AM CENTRAL TIME and then delivered to them after lunch. Same with Waldo grams, so be sure to get all your emails and Waldograms in before 9 if you want them to have it that day.

One tip about emails, they are $1 per email and are charged to your campers spending account. If you want to send several emails per day that will deplete their spending account and they’ll still get them all at the same time. If you want to send more than 1 per day, type them in a word document and save them. Then just copy them all over to 1 email at the end of the day, that way you’re saving some money and they’ll still get them at the same time.

You guys be sure to take your time and pace yourselves. I know being on the computer this much while your household computer expert is here at camp can be challenging for ya sometime. Just take your time or you’ll never make it through the whole 2 weeks

you guys have a good night, trying to keep up with your campers today and tonight during sock wars has worn me out and I gotta go check my eyelids for leaks…. I bet I don’t find any after just a minute or two!!

Have a good one, I’ll see ya tomorrow 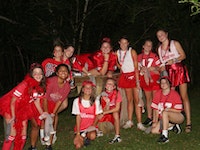 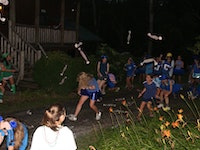 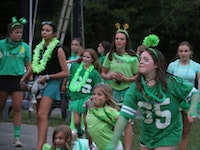