Posted by Larry Johnson on July 21

Welcome back to the Roost parents!! I hope you guys had as fun day as your campers have but that would be really hard, these ladies have been going strong all day in their new activities. It was really fun to walk around and see everyone out getting their first attempts in all the activities in over 2 years or their first attempt at all! They wasted no time getting all the rules and getting on the new V swing, Pamper pole, Tower of Power, their favorite horse they’ve missed and even the girls out at circus were already up in the air today getting familiar with the trapeze and cloud swing.

The campers that chose some of the less thrill seeking weren’t wasting any time either. Arts and crafts was buzzing with an unusual higher amount of older campers this session than the previous ones. My favorite class to visit throughout the session is, of course…. cooking! (hey, I didn’t get this size by skipping meals…. ya know what I mean??). I gotta tell ya, those ladies will be cooking up some fine treats and meals in there this session (maybe I’ve visited them in the previous sessions??). I’ll be sure to let ya know what all they’re up too but I’m gonna be honest, it must be really good ‘casue getting the campers to share what they bring out of that class has been an impossible uphill battle so far this summer!! Oh well, I’m no quitter so I’ll keep on trying and let ya know if I succeed.

As the day went on and I was busy out running some errands for camp, I had to stop back at our house where Sally teaches her 2 Bible study classes. When I walked in, I noticed it was a smaller class and since I was still a little tired from yesterday (you’ll start to see a pattern develop with my post…. sleep is optional until August….. apparently someone clicked the “no” box when I wasn’t looking!) So I decided to sit down in one of the chairs in the room and meet the campers that were in the class. They were extremely nice and polite (kudos to you parents!!) and when I started to get a little comfortable Sally remarked “don’t you fall asleep and start snoring during our class” (I know…. I was as surprised as you must have just been to hear her say that to me!!).

Just then, one of those sweet and polite campers I was talking about chimed in “if you’re gonna sleep you gotta leave!” Well, with me having a self proclaimed masters degree in sarcasm and movie quotes (like most dads) quickly replied to her, “So you’re gonna kick me out of a house where I’m trying to learn about Jesus?” Thinking I had just nailed this one and preparing an air “mic drop”. When she fired right back “If your sleeping, you aren’t learning!” Who knew my so called masters degree would be so destroyed and shot down by a younger camper apparently with a PHD in logic!! I had nothing…… my brain went blank and my jaw just dropped from the winning shot fired from a 13-14 year old…. Well played, young lady, well played. Someone out there is raising their daughter to be a dad gum good lawyer!!!

Later in the day (after I was finished licking my verbal wounds) it was time for our caving, survival and rappelling class (CSR for short…. ya see what I did there?). Its always a great time to see these young ladies try something completely new to them and to watch them struggle through he first couple days learning their new skills. Today was no different, several of them struggled at first but continued to work at it and improve as the class went on. As one camper put it as they worked her way you the top of the climbing tower (on a rope, not the rocks on the wall) “Well, thats progress from when I started”. And yes it was, I was so happy to hear her view the progress she had made instead of the difficulty she had making her way up there. This is gonna be a special class and I’ll keep y informed how they do with our put of camp trips as the session goes on. 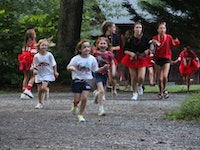 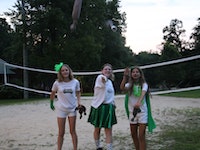 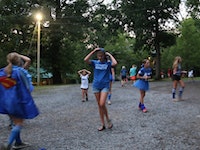 Tonight we decided to really crank up the action and we played every campers favorite “Sock Wars”. This is where we split the camp into 3 areas and each club (don’t forget the tips I told ya last night and their clubs!!) went to a specific area and hid their club flag. I need to mention that each camper was “armed” with an arm load of stuffed socks (don’t worry moms, we supply the socks, they aren’t using their own!). Once we rang the bell it was all out war as each club headed out to the other areas to look for the other club members and their flag to capture. If they found campers in other clubs all they had to do was launch their socks at them and if they were hit, then they had to report back to the scorers table to get right back in the game. Just try to picture a couple hundred girls, all armed with a load of stuffed socks and then two (or three) groups all round the corner at the same time. There are socks galore flying through the air along with the chants of “1,2,3 charge!!!!” as they try to coordinate their attacks on the opposite clubs. To sum it all up, its about as easy as trying to heard wild cats!!! I can tell ya this, they aren’t having any problem going to sleep tonight after all the running and sock throwing that I witnessed. Personally, if it was my in the middle of it all, I think I would have been in the infirmary with several ice bags on my shoulders and taking a mega dose of vitamin “I” (ibuprofen) just so I could go to sleep!!

Anyway, after all the cheering, throwing and running the final results were tabulated and the winners were………….. (how many of y’all are hearing a little drum roll in your head right now??)………..

With all the excitement from yesterday and today/tonight, we’re gonna slow things down a little bit tomorrow (thank goodness!!) and have our Talent Night here at camp. All the campers will gather in the gym and be treated to one of the finest talent shows you’ve even seen! I heard that Simon guy from the America’s Got Talent show was wanting to drop in and see for himself, but you know…. with all the protocols and keeping everyone good to go, we had to send him a big red “X” to let him know he didn’t make the cut (just like on their show). He can read tomorrows Roost and catch the results for himself.

Well, its been busy day and I gotta go get some rest so I’ll be able to keep up with everyone tomorrow (and work on a comeback to restore some self pride when I see sally’s Bible study class again!). You guys have a great night and get some rest, like I said before, we still have along time to go in the session and some of y’all are already looking really tired!!

have a good night,