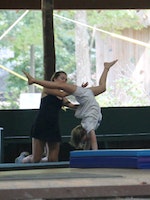 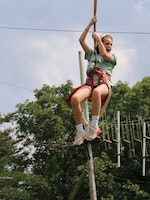 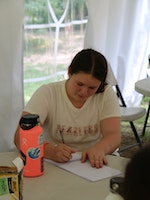 Happy Tuesday night to ya parents!! It’s been a busy day up here with all the activities going full swing and of course today, the entire camp has been a buzz about tonights activity the VMA’s (Video Music Awards), but more on that later. You could sure tell it was gonna be a hot one today as soon as you walked out of the cabin. The campers didn’t let the heat bother them too much as you can see from todays pics, their was still plenty to do even if you mixed in your time in the sun and time in the shade. Needless to say, the water stations were busy today as everyone kept a good supply of water on them all day long. The only place they didn’t need the water was ironically, down on the water. The river swim and blob were going full time as everyone used them as the perfect way to cool off with a big splash.

One thing that has changed the session is the hiding of the golden horseshoe in camp. Its still out there but Miss Francis has gotten much more detailed (and harder) on her clues as to where its hidden. The camper (club) that finds it will gain some major points in the race for the points cup thats awarded at the end of the session to the club with the most points from winning the nighttime activities and of course finding the horseshoe. The past sessions, it was found sometimes before 2 clues were given to its whereabouts but this session…….not so fast my friend!!! They have been looking under every bush and rock in camp trying to find it. I can’t walk through camp without at least 5 campers stopping me and asking or even bribing me with beli deli treats if I will tell them where it is. That may be the reason Miss Francis doesn’t tell me where she hid it, she knows I wouldn’t be able to hold out against the bribe of a Butterfinger candy bar (and full disclosure here….. even I’ve caught myself looking around some trees myself and I haven’t had any luck yet either!) Don’t worry though, I’ll let ya know as soon as someone finds it!

After a full day exploring one of the many caves in the area yesterday, our CSR class took a little much needed time off and spent today learning how to tie all the different knots we use in the class. We spent the last half of class “rescuing” one of our instructors by tying him in to a rope and building a 3:1 haul system, with a progress capture, to successfully raise and lower him several times from the top floor of the dance hall. (if you’re confused by some of the words describing what we built, just ask your camper if they’re in the class, they’ll be happy to explain it all to ya!!). I’m happy to report that after several trips up and down the back side of the dance hall, we safely lowered him into the chair he started in. (and it was all done by the girls!! They’re learning so much this session, I’m really proud of what they’ve accomplished)

There’s one thing that happened yesterday I just gotta tell ya about. Our CSR class pretty complex so it take up 2 of the girls class periods. So the ones that take this class actually miss out on another class opportunity. One of our campers who’s in the class really loves archery but wasn’t able to take it this year due to the CSR class. As I walked past our archery range yesterday during bell deli (snack time for campers and counselors), I noticed one camper in archery shooting away and doing pretty dang well! When I walked up there I saw it was a camper that was in my class, but was shooting archery during “break time”. Our counselor who was head of archery was there with her letting her shoot during this “snack time”. When I asked them what they were doing, she explained how she knew this camper enjoyed archery but wasn’t able to take the class this year so she stayed there giving up her snack time to be able to let the camper enjoy the things she loved.

These are the ladies we want as our counselors and around your daughters. The counselor may have though she was teaching her about archery but she was really teaching her it’s fine to go out of your way and do little things to help others. Even if it forces you to maybe sacrifice some of your free time (or snacks) too. It was one of those things that happens at camp that not everyone see’s but something that camper will remember for a long time to come.

Theres plenty of that happening all over camp, Thats just the one I happened to see. I love to write about your campers trying out the ropes course, or the blob, or getting up on a horse that outweighs them by 600 lbs and guiding it around the ring. The bottom line is these things are just (fun) tools we get to use to help the campers grow in their confidence and then be able to expand their comfort zone even more the next day and the next day and so on. It truly is amazing to walk around now seeing these same campers that just a week ago were nervous about doing activities they now do without even giving it a second thought. Talk about expanding your comfort zone? They are doing it big time!!

Tonight was our VMA’s (see….told ya I’d get around to it sooner or later), where all the campers came to the gym decked out in all sorts of costumes for the grand premier of their cabin videos. I’m not sure where they found all the different costumes they had (and I’m definitely glad I didn’t have to help haul in any trunks on opening day if they had them all stuffed in there too!), but they had more costumes than a movie set and they used every one of them!

Each camper walked up the red carpet to the gym and was “interviewed” as to who they were and what they were wearing. They then proceeded to follow the red carpet to the photo station where all their pics were taken before the show. Once everyone was in and seated, our presenters would come up and read off the nominees for each category and then tear open the envelope to reveal the winning cabin. Once they came up and had their cabin picture made, it was time to sit back and finally see their video. There were all sorts of videos from all sorts of music and each cabin did a great job making their video. I’haven’t see the pics or even the video yet, but our photographers and videographer were in there working hard so I know theres plenty of visuals for you guys to see just what I’m talking about.

Well, I gotta go and get ready for another cave trip tomorrow so I better head out and start getting all the gear set before I go to bed. You guys hang in there, you’re half way there. You’re campers will be so proud of how well you’ve done keeping up with them on the computer while they’re here and not home to help ya!!

Y’all have a good night, I still gotta long way to go so I’m heading out early (kinda)……. I’ ll see ya tomorrow!!