Posted by Larry Johnson on June 15

Happy “final blog of first session” to ya parents! Its just doesn’t seem like its been 2 weeks since we start out on this little camp journey but time flies when your havin’ fun. Speakin’ of fun, the girls at the water front had a lot of fun today (well, one reason was its the waterfront and as warm as its gotten these last few days, thats a great place to be) the main reason was because we had a new addition to the waterfront this morning. Our new Blob arrived (finally, it was ordered over 4 months ago!) and as soon as it came off the truck, we had it inflated and in place for everyone to enjoy. If you’re looking through the pics you might see a giant red blue and green balloon looking object where it looks like the girls are being catapulted off one end. Thats about what it is! One camper jumps down off our platform at the river and lands on her bottom on one end and then crawls out to the other end and waits for the next camper to jump down and do the same. As soon as the 2nd one lands, the first one flies up on the air and lands every so un gracefully in the river. Its a great time and I know all the campers were glad it finally arrived in time for at least one day of splash and swim!

Today was our last day of classes and out at the horseback rings, the campers were competing in the preliminary rounds of the Grand Championship. All the winners today will be competing tomorrow (Thursday) for the Grand Championship and for club points. Not only does the winner bring a lot of points to their club for the Horse Cup that will be presented at our end of session banquet tomorrow night. But that get to show the entire camp how well they ride since we’ll have everyone out there cheering them on.

Tonights activity was our chorus and drama class presentation of Frozen. All the campers gathered in the gym and were treated to a show with some great singing and dancing from the campers in that class. Let me tell ya, they belted the songs out like never before! There were several standing “O’s” during the show for all their efforts. It was easy to see they’ve been working extremely hard all session long on getting their lines and positions just right and tonight it showed! Kinda made me wanna go outside and build a snowman if I could have. We definitely wold have taken some “Queen Elsa” time around here the past few days!

Beside getting to see the Frozen presentation, we were treated to an unbelievable display of gymnastics. This campers were flipping and flopping up and down the mats and doing things that made my body hurt just watching them.

Tomorrow will not only be Grand Championship day, but also packing day, awards day, banquet night and finally river vespers. We’ve talked about Grand and packing day speaks for itself so lets get on over to awards day. Everyone will gather in the gym and get their awards from each activity and how many years they’ve attended camp awards. After that it will be banquet time where the girls will enter the dining hall dressing in their club outfits and all sit together with their clubs. After dinner we’ll begin the banquet where the highest awards of each activity will be announced, the club leaders will read their speech to the fellow club members and then its time for honor campers. These are all chosen by the counselors for campers in each age group that demonstrated the very best of what it means to be a camper and a great friend. Its a huge honor to receive an honor camper paddle and its something they hang on to for quite a while. As we near the end of the banquet, you can notice the campers all start to realize their time here with all their new and old friends is coming to an end and it may be awhile, if ever, when they se them again. If I could get Kleenex to sponsor the end of the banquet I could retire! There won’t be a dry eye in the dinning hall as they join together for the last time. 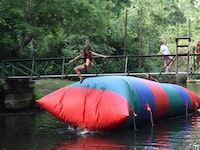 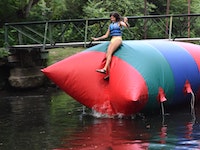 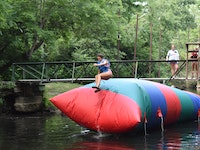 After banquet its off to river vespers where each club will gather along the banks of the river and our club captains will together light the final campfire of the session. After that its time for the cabin wishes and then (to me) the best part of the whole summer. The age out speeches. This is when the oldest girls who are in their final year of being a camper will step to the microphone and deliver a speech that comes straight from the heart. It one of the most moving moments of the whole session to hear these young ladies step up and talk about what their time (over the years) had meant to them. It’s honest, its sincere, and it comes with all the emotion of them realizing their days as a camper are truly almost over.

One privilege of being an age out camper, besides getting to make your river vespers speech is always getting to have a home cooked by Sally, over at our house. Tonight was the night for that and all our age out campers enjoyed the meal of 2 baked hams, sautéed veggies, homemade mac and cheese, rolls and of course ice tea! Its a treat to be able to sit down with these girls and have a nice quiet meal and just talk to hem about camp and their lives away from camp.

Folks, its been an honor to get to bring ya everyday camp as best I could. I hope those of y’all that played along at home the whole time have enjoyed reading it as much as I have bringing it to ya. We can’t thank you enough for entrusting us and all our staff with your most prized possession over the last 2 weeks. Its been great to see them grow and have fun all at the same time (and without an iPhone!!!….who knew???)

I hope you all have a safe trip up here on Friday and we’ll see ya out front when you arrive. We know you’ll be glad to see your camper, we know your camper will be glad to see you, but don’t be surprised if your daughter wants to drag you around camp to show ya all the things she’s done and all the new friends she’s made while she was here. It’s been known to happen before!

Thanks you and God Bless!

for the last time, y’all have a great night……I’m outta here!