Posted by Larry Johnson on June 08

Hello again parents and welcome to day 3 of the camp news. As we talked about last night, Mother Nature was present up here not he mountain today but all in all, it wasn’t that bad. The early morning started off with a little rain while everyone was still asleep but that stopped just before breakfast and then she gave everyone a little shower after lunch. The most rain we had was perfectly timed during our dinner and then again while we had game night and everyone was in the gym. So when you can get some rain ant it doesn’t mess up your daily activities, thats pretty good day. Of course theres a little residual rain happening right now but everyone is in their bunks and I’m sure fast asleep to the sound to the rain hitting the tin roofs. (can you blame them!!)

So with Mother Nature giving everyone a break and letting us get into our 2nd day of activities, there was plenty of fun to be had all over camp. One of the best parts of day two is already seeing the improvement each campers make in their activities. Watching someone starting to have a little success at archery or rifelry. Seeing campers get a little farther out of their comfort zone on the ropes course and being able to move through the elements a little quicker and with a little more confidence. It’s amazing what a little taste of success will do for three confidence! I can’t wait to see ‘em tomorrow and how they do then.

The campers in arts and crafts and pottery are starting to make some progress as well on all their projects. It’s always surprising to see how their skills when they transform some clay or a bare wooden project into something that looks incredible. 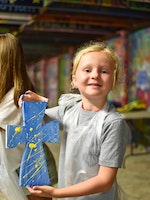 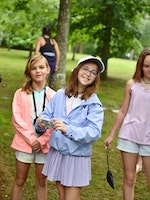 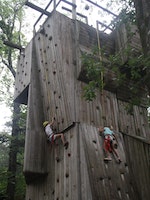 The mini campers are having a ball with all their activities. Its really fun to watch them make their way all in a group from class to class. Its like a bunch of little ducklings following their counselor everywhere they go. Speakin’ of mini campers. Tonights activity was game night where each group of campers got to compete in a familiar game show. The mini campers game was dancing with the stars as they got up on stage in from to everyone and performed their free lance version routine to the several songs that were played. The only thing was it was also like musical chairs, as soon as the music stopped (which it did several times each song), they all had to stop dancing and so their best impression of a statue. All the other campers enjoys watching ‘em show they moves and then suddenly stop unexpectedly.

Some of the other games the different cabins got to play were Win Lose or Draw where the ladies of Summerplace took turns drawing several items on pasteboard where the rest fo the cabin had to take a good guess at what they were drawing. I gotta be honest, I’m not sure if it was the barrage of wild answers as soon as they started drawing or if some of the campers just have an abstract eye for things that don’t look at all what they are supposed to, but they managed to figure out what every item was that was drawn tonight.

Some of the other games each cabin played was family feud, complete with surveys of important questions like “whats the most popular dessert at camp” or “Which horse do the most campers ride”. Other games they all competed in were American Idol, Wheel of Fortune and the one I’m really glad they didn’t ask me to join in was “Are you smarter than a fifth grader”, I’m afraid they would have discovered the answer quite possibly could have been a resounding “NO”. 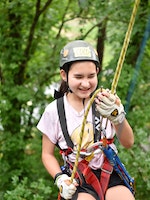 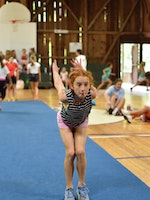 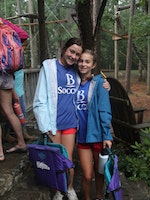 Tomorrow’s weather is looking a lot like today so we’ll see what that brings and what all were able to get in. We’ll have our camp photographers and videographers out shooting all the action so you guys that are playing along at home can try to keep up with everything going on.

Tomorrow nights activity will be called “Get Skyline Back” where our counselors will dress up as boy counselors from Camp laney and come busting int the dining hall after dinner and take the club captains and club flags hostage and head out to specific areas of camp. Now don’t worry too much, you know good and well your campers just ain’t gonna stand for something like that when it comes to their clubs. They’ll get loaded up with plenty of those stuffed socks again and head out to rescue their leaders and club flags form the counselors. I ll have more details on how that went down tomorrow night but just know, it will involve everyone all decked out in their club colors again and a lot of socks and campers flying around. You don’t wanna miss it!!

Well, it’s gettin’ late again so I’m gonna wrap this yup and head off to try and check my eyelids for leaks if ya know what I mean. You guys hang in there and we’ll see ya tomorrow night!!