Posted by Larry Johnson on July 20 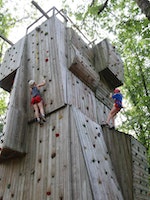 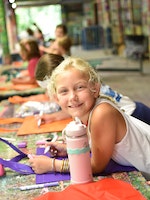 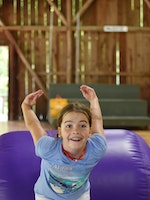 Well howdy parents! I don’t know about you guys at home, but its still hard for my brain to get used to opening camp on a Tuesday. All day long I didn’t believe people when they said it was already Wednesday. Don’t worry though, it IS Wednesday, or more importantly, its the first day of activities up here at camp so we hit it full speed ahead. Campers didn’t waste any time this morning getting right to it in all their new classes. As I was working at the pool this morning, you know, cleaning, adding salt, looking for a campers retainer that came out…..you know, all the normal stuff you think of when you think of pool work. I was just leaving when some of the campers were arriving for their fun swim time. As soon as one of the campers jumped in she was quick to let everyone know it was cold and refreshing and just the way she liked it. Another camper was right on cue letting everyone know she had just finished horseback class and she had obviously made the perfect choice of activities by choosing fun swim after an hour in the sun on horseback. All the other campers around her nodded their heads in agreement and then followed her lead and jumped into the pool. just FYI…. the retainer is still MIA but the search continues, I’ll keep ya updated.

This afternoon all the campers in ropes course were getting up off the ground and giving their best attempt at climbing to the top of a semi stable pole, balancing on top of it and then leaping out for the trapeze that was precariously hung 6-7 feet away. Quite a few were successful in catching it and hanging on for deal life before being lowered slowly to the ground. The ones that missed were still slowly lowered to the ground and got in line to give it another try. I love watching them try something over and over when they don’t get it the first or second time. It takes a lot of courage to climb back up and balance on that pole. They never give up.

In the class I happen to teach, Caving, Survival & Rappelling (CSR- (Camp Skyline Ranch) see what we did there????) the girls got all their equipment and then started to learn all the ways it functioned and how the ascenders worked to get them up the rope to the top of the tower. They weren’t there long before we went over the rappelling devices and they worked their way back down the rope. By the end of the class, they were up and down more than an elevator in a high rise hotel. This will come in handy later in the session when they take their first out of camp trip to some 30’ cliffs and then at the end fo the session when we bounce (rappel and then climb back up the rope) the side of Lookout Mountain (100 feet!!). Baby steps first! 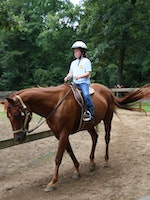 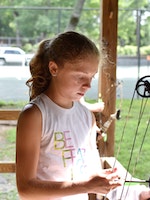 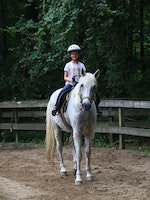 Tonight, after dinner we started the night time activities off with a bang in the camper favorite “Sock Wars”. This is where each club (remember how important it was to remember those?) took their club flag and hid it in their area of camp they were assigned. Once we rang the camp bell, all they had to do was head out and try to find the other clubs flag and take it back to the scorers table. there was one slight little problem though….. each camper was armed with handfuls of stuffed socks they could use to get each other out. If you were hit by a sock that was thrown by a camper from another club, you had to report to the scorers table yourself (with your arms over your head to let everyone know you’ve been hit) before you could get back in the game. As the night and battles went on in the cool night air, all you could hear was group chants of 1….2……3 CHARGE!!!!!! all across the mountain.. There were some epic battles that took place when one group from one club would run into another large group from another club and the air would be filled with socks, screams, and cheers as they battled it out. How some of their arms are still in place is beyond me. If I had played, I’d have to have a heaping dose of vitamin “I” (Ibuprofen) before I could function again.

Needless to say after a full day of activities and a night filled with running, throwing, cheering, more throwing and LOTS more cheering, all the campers should be sleeping like a bug in a rug tonight. I don’t know, maybe thats the purpose of playing that game so early in the session????????

I almost forgot to tell ya the one thing you want to know, the results???? Well, here ya go!

Mounties 3rd, Rangers 2nd and the Terrific Troopers FIRST!!!! Way to go girls! The Troopers take an early lead in the points cup thats awarded to the club with the most team points at the end of the session. We’ll see how it holds up after the next set of nighttime activities.

After all the fun and excitement from today and tonight, we all settled in for campfire. Although have 2 separate campfires on different sides of the river, they both ficus on the same theme each night. Tonight ’s theme was Compassion and Mercy. This was highlighted this morning at morning watch for our morning devotion and then wrapped up again at campfire.

Well folks, thats most of the excitement from todays first day of action. I said most ‘cause I try to get around camp and see as much as I can but theres always something going on and I’m smart enough to know I don’t see everything. Thats why we have 2 photographers and 2 videographers. You can catch everything I missed by checking the pics and video. I’m gonna let ya go so you can do just that. You guys have a great night and enjoy the pics (unless you’re one of those playing at home that likes to read this with your morning coffee) In that case, have another cup on me and have a great morning and day…… We will up here!!