Posted by Larry Johnson on July 26 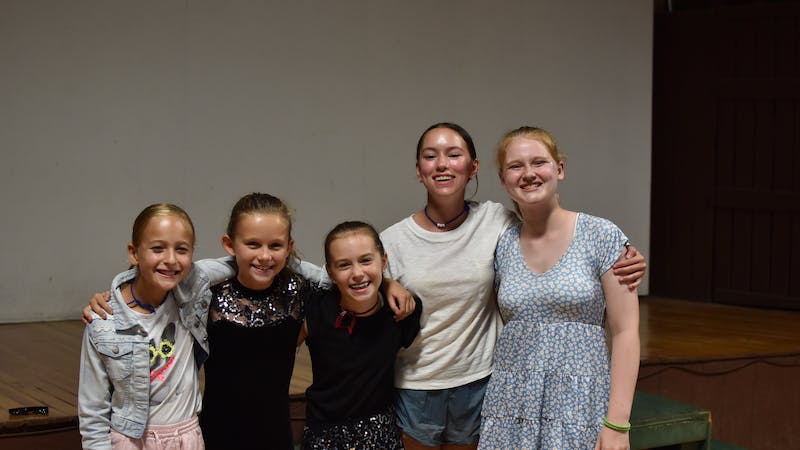 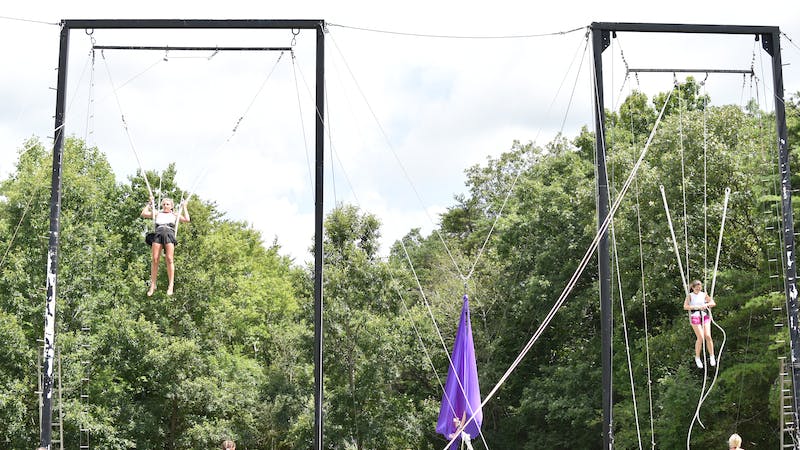 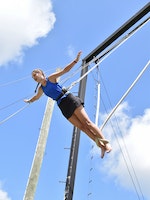 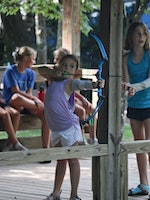 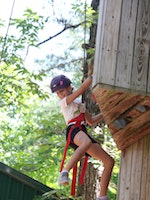 Howdy parents! Welcome back to the camp blog and a happy Tuesday to ya! It’s been another great day up here with cooler temps for everyone and that means they can be more active in each class. The girls in circus class were definitely more active today as several them really pushed themselves out of their comfort zone to try tricks up in the air they hadn’t tried before. There were several “first” out there this morning and afternoon as for some reason they all took a does of “brave medicine:. It must have worked cause almost all of them were swinging higher and faster and throwing their tricks with more commitment than they have this session. Their determination paid off too as several of them successfully completed their tricks for their first time!

As I made my way around camp, I noticed there was some excitement around the archery range again so I head over there to see what it was. Apparently not only in circus were the girls getting better but in archery too as we had quite a few campers get their first ever bullseye to the joy of all the other campers in class who knew it was their first time. One camper joined the elusive “30 Club” where you only get 3 arrows and you guessed it, ya gotta sick every one of them right in the middle! Needless to say thats a pretty exclusive club she’s in now and trust me, the campers (and counselors) that are in it know each other and go out of their way to congratulate each new member. I’m not sure if its a secret handshake or something like that (which tells ya,…….. I’m NOT in the club). If ya wanna know how important these stats are to your daughters, I had one camper let me know she made her 55th bullseye today. Yep, you read that right, she’s been keeping track from her very first one years ago. Must be something like when Sally can tell me (accordingly) “exactly” what I said in a conversation several months or years ago and I can’t even remember what I had for breakfast that morning…….. There may be one or two of y’all out there that know what I’m talking about…………I thought so.

The camper final archery tournament will be Thursday During 2nd beli deli and the area around the archery range will be packed with all the campers sheering on their favorite club member in the tournament, We’ll let ya know how it goes.

Speaking of Sally, she does a great job of teaching her Bible study class every day. Well today she went above and beyond with her teaching and took time to “educate” several campers she was with on the walking bridge across the river in the fine art of spitting into the river to watch the fish come up and try to eat the spit. Now don’t get all grossed out on me, I ain’t trying to sell this as a home entertainment game or anything, I’m just telling ya what happened up here today so stick with me. The campers are all apparently “A” students as everyone of them had cotton mouth by the time they were off the bridge from spitting every drop of water in their mouth down on the river to watch the fish swim up and attack it. Who know, maybe I can sell it as a home entertainment game? It sure caught on up here today with these sophisticated young ladies!! (somewhere out there theres a proud dad from reading this!!)

This afternoon was much of the same (minus the bridge spitting) with campers working on all their projects in arts and crafts, painting and pottery. They’re all working hard to make sure they’re finished before the end of camp andI gotta tell ya, there are some really nice projects down there. I had no idea these girls were as artistic as they are when I see some of their paintings. In poetry class, I was amazed at how they took a lump of clay and pounded it out only to reform it into the beautiful final image they had in their mind from the beginning. Pretty sure theres a good Sunday school lesson in there somewhere and ya don’t even have to look that hard to see it! I know I cannot wait to see how everything looks once they put them in the kiln and get the finished paint. I know you’re gonna be as amazed as I am!

Tonight we had “Surprise Night” and the surprise activity of the session was…….Talent night! Its one of these activities that was around for awhile and then it got moved off the schedule for a few years. Well the campers were sure excited to have it back tonight and the ones that participated in the show tonight gave them good reason to stay excited. Some of the acts included an Irish dance, a camper playing a piano and singing an original song about Skyline. We had everything from piano playing, dancing, gymnastics, a comedy act and even a mime. (who knew that was still a thing??). One of the more impressive acts of the night was one camper that did a full back bend and then went up AND down the stairs to the stage while still in the back bend. Our ropes course head “Pickle” was so impressed he gave her a much coveted “Pickle Bracelet” on the spot. I hope this doesn’t lead to other campers working on that move themselves. Theres no way I could watch it over and over again. my back hurt just watching it the first time alone!

After Talent Night, it was time for campfire where all the campers gathered to hear the nighttime devotion from one of our counselors. Tonights theme was Forgiveness. What a great lesson to hear about and practice in our daily lives.

To be honest with ya folks, I think the toothpicks I’m using to keep my eyelids open are about break from the stress of the upper lids trying to shut and go to sleep. I better head off before something bad happens so I’ll see y’all tomorrow.

Have a great night, like a slow kid in dodgeball………I’m out!