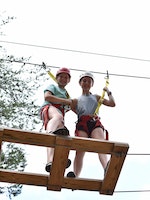 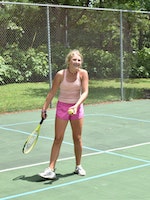 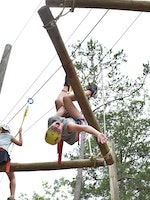 Happy Humpday to ya parents!! Its been a wild day with everyone up here buzzing with excitement about tonights activity, the Skyline Vide Music Awards. There’s good reason they were exited and thers more about that to come, but first lets start off with what happened before the VMA’s.

To start off the day lets head West, or at least to the horseback ring where they were all horseback riding western style today. Usually we have 3 rings of English horseback style riding and we reserve Western style just for our trail rides but today we gave all the girls a dose of some real Western Horsemanship and they loved it! They started off with some pole navigation to get them used to making their turns at a little higher rate of speed and then moved on to some real barrel racing. After they were finihsed with the racing, they did a little rail jumping to finish the day. The girls enjoyed the change of pace and from the looks of it, they started to get into the high speed turns around the barrels and the sprint to the finish. Who knows, there may be some few future rodeo queens in the crowd that get their start right here at camp. It was fun to see them use a whole different technique and style controlling a horse that weighs about 7-8 times their own weight. To see them do it with speed and a smile is just a bonus.

From horseback I headed to the climbing tower and got an impressive dose bragging rights that were all well deserved from a class full of 9-10 year olds this morning. As soon as one of them told me she could climb one of the routes on the wall all the way to the top, the rest chimed in with everything they had done and let me just tell ya, they’ve been busy working on that tower. At first I was told by a certain camper (G.O.) that she had climbed every wall on the tower at least twice. Then it was a group of campers that had made it to the top on two of the most difficult routs. Then its was “guess how many club points I earned for my club?”. (they get club points for successful climbs to the top). As I started to look around and up at the tower, I noticed every route and every ropes on the tower was filled with campers concentrating and straining to make every right move to further their way upward. It was then I put 2 and 2 together and came up with the solution that it was club point day in every activity. Before I left one older camper informed me she had not only made it to the top of all the routs too, but had learned how to belay and work the bottom of the rope for other campers. Of course when they are learning to belay, they get to belay a chair down from the top, not an actual camper. Hopefully, somewhere in Chicago, theres a proud dad reading this about his daughter! It was impressive on how focused, working harder and getting better at everything they do from the girls in horseback to archery, tower, riflery and even circus were so far today.

Speaking of circus, while I was preparing everything for our caving trip today I got to watch a few circus classes and it was fun to go back to my old roots (read my bio on our webpage) and see the girls throwing tricks with the greatest of ease. I could see them smile all the way across the field as they were lowered back down to the mat after each trick. Who knows…maybe theres a few future Flying Seminoles in the crowd (its already happened several times before!!).

After lunch, our CSR crew headed back underground (it was almost 90 outside, underground was a much better choice) where they enjoyed a few hours of some good old fashioned muddy fun. They squeezed through tight spaces, climbed over rock edges and even splashed through mud holes filled with water (mud) on our way through the cave. Again, the worst part of the trip was having to exit the cave and re enter the humid air outside. Every camper with me today will agree, trust me. We did make a few 4 legged friends underground as they found family after family of salamanders on their way through. There’s just something about salamanders…..that the campers love to look at them every time they see one (or several).

Throughout the day you could hear all the girls talking about who they were gonna be tonight and before we knew it, it was time for tonight…..the Skyline Video Music Awards!! All the girls have been working on their videos all session long and tonight they got to see the finished product for the first time! Of course you can’t have an awards ceremony without having a red carpet pre ceremony and thats exactly what we had. All the girls were dressed up in all sorts of costumes (no wonder they had so many bags on check in day!). We had everything from the Disney Princesses, to Duck Dynasty, grandma’s, 3 blind mice, some bananas, several dinosaurs and heck…. there were so many great ones, you’ll have to scroll through all the pics to see for yourself. Even our office staff and nurses got into it. Our “Peso Princess” Paige had her little boy (who all the campers know really well by now) as he was a police man and even featured in one of the best commercials. Our Program Director Ivy had her little girl dressed up as Sebastian the sea crab from The Little Mermaid and that fit right in with the rest of our staff and nurses as we completed the cast from The Little Mermaid. Even yours truly was talked into playing the role of King Titan. To be honest, it didn’t take much, we all love this night every year and look forward to surprising the campers when we show up all decked out.

As they came up the red carpet they were interviewed as to who they were are and who designed their outfit. Once everyone was in and situated, we read off the category for each award, followed by the cabin winner nominees. They we rip the envelope (ya know we gotta do that!!) read the winner and show their video. After the video the whole cabin gets to come up to the front and pose for a picture with their award. Its great night that EVERYONE enjoys and looks forward to.

After the conclusion of the VMA’s it was time for our evening campfire. Tonights theme was “Love, What is it?” A great topic for the girls to hear about real love and how God loves us. It was a nice way to end the day and night as they all headed off to their cabins and by now are all fast asleep.

Tomorrow will be here before we know it and we’ll be, believe it or not, heading towards the last few days of activities. Theres still a few activities that are competing for club points so the focus and determination will still be there as all the campers finish the session strong.

You guys are doing a great job of staying strong too and were almost finished with the session. Keep up the good work and keep getting your rest, there just a few more days to go and you wanna be there with us every inch of the way!!