Posted by Larry Johnson on July 10

Merry Christmas in July Eve to you parents!! We are all hunkered down for the big day tomorrow (or today if your an early morning reader). We tried not to be distracted by Christmas tomorrow and go about our business with all the activities this morning. One “new” activity is just a version of tennis and that is “Pickle Ball”. I gotta admit, I’ve never played but I do like what I saw today with the younger campers playing. not too much running and a much slower pace than tennis. I may have to take a try but you know, I think I’ll start off small and by small I mean I’ll play the youngest campers first!!

Speaking of playing, I gotta apologize for being a little late tonight with starting the blog. I tried to leave the house to head over to start writing but on TV the Red Sox had just tied the game with the Yankees and they they won it in extra innings. As much as I tried, I just couldn’t leave the screen sorry about that and LETS GO RED SOX!!

Now, back to my late (later than normal) night writing. I stopped by the girls down at the rifle range to check in on them today and they are taking this class serious! They were concentrating and working on getting better with each grouping of shots. Good news is they were doing it! Some of you dads (or moms) are gonna have some good little hunting partners with ya this fall. Just wait and see.

This afternoon it was time for CSR class where we had a “survival” skill day. All the girls in class learned and successfully started a fire using just a ferro rod and some cotton. They also made their own hypothermal prevention kit. Close to the end of class we “just happen” to run into one of our counselors who….”was hiking and fell in the river and was really cold” (not really). The girls had to determine her level of hypothermia, use what they had to warm her up and then using the ferro rod and cotton start a campfire to help warm her up. I’m happy to report she is warm and doing fine thanks to the new learned skills of the girls in class. It was fun to se them learn a new skill and then get to practice putting in into action.

Tonight was a BIG night here at camp. All the campers came to the dining hall dressing in their best Christmas get up and some of them went above and beyond. One was even dressed up as a Christmas Tree and several were reindeer. After Dinner everyone headed to the gym for Santa’s workshop where they had face painting, made ornaments to hang on the Christmas tree outside, made Christmas chains to hang on the tree, danced to Christmas music and more. They headed by cabin down to the dining hall to take turns at watching a Christmas movie complete with Santa’s favorite chocolate chip cookies and milk. Some of the campers took the opportunity to hang the ornaments they made on our camp Christmas tree outside the gym. All I can say is there was plenty of Christmas spirit from every camper as they passed me outside and everyone of them yelled “Merry Christmas!!” as they went past. Of course none of them offered any of their cookies but that’s OK, it was all meant for them and they enjoyed every bite. All this is in preparation for tomorrow morning when the big guy himself will stop by camp to hand out presents to each cabin. Its gonna be a Wonderful (life) Christmas in July.

Speaking of Christmas, What would a Christmas be without it being a White Christmas. Remember that cold front I was talking about last night? Well, its developed and my friend at the Weather Channel Jim Cantorre, has assured me its heading straight for Mentone. Specifically, Camp Skyline! He promises that our campers will all awake to a Miracle on Lookout Mountain as they look outside tomorrow morning and have a White Christmas!

Well thats it for tonight except for our traditional T’was the night before Christmas poem so here ti goes…….y’all have a great Sunday and Merry Christmas in July from Camp Skyline. 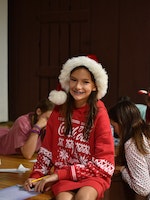 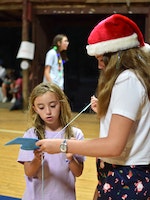 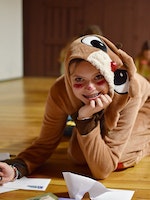 Twas the night before Christmas and all across camp

the humidity was high, everyones clothes were all damp

The stockings were hung by every campers bunk

In hopes that St Nick would leave something on their trunk

the campers were all nestled and snug in their beds

While visions of ropes course and horseback swirled in their heads

With Sally in her PJ’s and I with my cap,

Had just settled down for a much needed nap

When out in the camp there arose such a clatter

I stumbled out of the bed to see “whats the matter?”

Away to the windows I flew like a jet

if something was outside, I hoped it hadn’t left yet

The moon had a reflection on the river below

If something was in the water, I wasn’t gonna go

When what to my wondering eyes should appear

but a miniature sleigh, pulled by some nice looking deer

With a little old driver so lively and quick

I thought I was seeing things, perhaps I was sick

More rapid than eagles, he called them by name

No matter who he was, this fella had game

Then Bar H, Hot box and Brookwood, he toted his pack

Then on to Rosey Den, Edmae and Totem Hall

Then Hillbillies and Deweys Den, he hit ’em all

Then across the river he flew in a snap

He knew his way around, he didn’t need a map

Up on the roof, of Summerplace he landed

And quickly left them all presents, and did it single handed

And then in a twinkling, on to Riverside’s roof

He went straight down the chimney, in just a “poof”

As I drew in my head and was turning around

Down Riverside chimney, he came with a bound

I though to myself “he’s gotta be hot, if that was me I’d be dead”

A bag was flung on his back full of toys

it was presents for the girls, this trip had nothing for any boys

He had a broad face and a little round belly

He was chubby and plump, a right jolly old elf

I thought when I saw him I was looking at myself

A wink of his eye and a twist of his head,

was a notice to me, its time to go back to bed

He stopped by the infirmary to visit our nurses

and left something for them in each of their purses

Then laying a finger aside of his nose

He sprung to his sleigh, to his team gave a whistle

He took off really fast, like a Patriot missile

But I heard him exclaim as he flew above the pines

Merry Christmas to all, from Camp Skyline!!