Monday Funday and Guess Who Found The Horseshoe

I’m not sure if theres such a thing, but Happy Monday to ya parents! (yes, I now know after talking to a lot of the mini camper parents this morning that most of y’all take the easy way and read the blog when its delivered to ya on the next day so its probably Tuesday now). Anyway, its still Monday up here now (not for long though) so heres what all happened today!!

We had to say good bye to all our little friends the Mini campers this morning. Although we hate to see them leave, it was great to get to take some time and talk to many of the parents that were here to pick them up. One thing I found out was we have campers here from all over the country. I got to speak to a parent from Texas who was loving the “cool” Alabama weather (I guess its perspective if you’ve been in the TX heat all summer) and one neat thing I found out this morning was we had not 1, not 2, but 3 moms that all lived together in New York after college who all had their daughters here at the same time this session. Its great to see the camp families that can get back together even if its just while their daughters are here.

While the Mini campers were showing their parents all around camp and all the things they did last week, the rest of camp was back at their regular schedule of enjoying all the classes and the “cool” mountain air thanks to a nice layer of clouds that stayed over us this morning. One bit of excitement today was that the MOUNTIES FOUND THE HORSESHOE!!. If you’re not aware of what that mean, we hide a golden horseshoe somewhere around camp and if they all have good cabin inspections they get a clue as to it’s whereabouts. The club that finds the horseshoe earns a mega amount of club points to help them in the quest of the point cup thats awarded at the end of the session. This is in addition to the points they earn in all the evening activities.

Speakin’ of club points, today at archery they officially started shooting for club points in their effort to become the camp champion archer. Its a several day process so I’ll get ya more details as the tournament unfolds over the next several days. One things for sure though, they just took archery a little more serious and now every arrow counts (literally)! It may be that time of year for me to break out my bow and start tuning up a little myself…..I think it is, archery season is right around the corner. I just hope I’m not put to shame by any of our girls that are already in top form.

Our CSR class took their first trip out of camp today and spent the whole day where its constantly 57 degrees underground in one of our local caves. They enjoyed exploring and squeezing through all the tight areas. Only thing I’m not sure about is the phrase they used to encourage each other if someone had any doubt as to whether they could fit or not. Theres just something about “If Larry fit, you know we’ll fit” that I can’t figure out if thats a compliment to my caving skills of not…….. I’m happy to report that everyone did fit (even me) and were all back. Of course when we returned to the surface there was a chorus of “oh gosh, can we go back in?” once they came back to the heat and humidity on top.

In sports class today, the girls tried their hand at lacrosse. Not sure how many play it in school but there are some really good lax players out there and they enjoyed shooting on the goals. I hope its something they enjoyed and maybe we can do it a little more often up here. Not sure what they enjoyed more, the shooting on goal or laughing at those who were giving their best efforts at just throwing and catching (or attempt of). 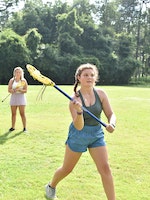 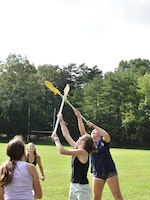 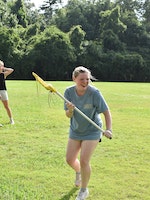 Tonight was counselor hunt where each of our counselors put on their best Real Tree camo and put themselves in places where they hoped not to be discovered for a couple hours. Some of them chose to take a different route and disguise themselves as trash and hid in trash bags in cans, dumpsters and everywhere they could find. I don’t think it paid off for them as many of them were found and then forced to take the walk of shame back to the gym with the campers that found them to see how many club points they were worth. The best part is when a camper finds a counselor, beside getting their points, they get to take that counselor home with them for the rest of the year after camp. Not really, I just wanted to see how many of y’all out there are still paying attention.

After turning over every leaf and looking under every rock and trash can lid, the counselor s had all been found, returned to the gym and had their points tallied up. The final results are………………. (ya hear that little drum roll in your head?)…………. Rangers 3rd, Mounties 2nd and the Terrific Troopers 1st!!!!!! Congrats Troopers in grabbing some more points towards that point cup!! The race is getting tight!!!

Well, thats about it for Monday. After crawling through the cave all day I know in a few minutes I’ll be just like the campers are right now….fast asleep.

You guys have a great day, were busting through week 2 and sprinting our way to the finish. Get some rest so you can do the same with us and ya don’t miss anything!

Have a good night, I’m about too!!