Splish Splash and more socks in the air

Posted by Larry Johnson on July 08

Fantastic Friday to ya parents! Yea, I know, I’m still having to look at my watch or our Fun Calendar to know exactly what day it is, I’m still behind form starting on a Tuesday. Whatever you wanna call it, it was a warm and fun day. Trust me, we had plenty of both warmth and fun! To help combat the warmth, the girls in sports class played a new version of kickball called “Slip and Slide Kick Ball”. It starts off the same as your regular game of kickball but once you kick the ball theres a slip and slide as all the base running paths. and a pool of water as each base. If you ever wanna have some fun, just try this version and sit back and enjoy watching the girls try and run/slide from base to base. Best part is they’re all covered with water and soap before you get through the first inning! Needless to say, they had a great time laughing and playing this morning.

As the day went on, after lunch it was time for the girls in the CSR (Caving, survival and Rappelling) class to take their first out of camp trip. Now even though we were under the trees and there was a slight breeze, we still had the heat, but it was’t too bad. All the campers got thri first taste of rappelling down an actual rock face and then climbing back up the rope and traversing the edge where they go from climbing vertical to horizontal as they make their way over the top. They did an amazing job and you could see them gain confidence with each trip down and up as they “bounced the cliff” more times than they (or I) can remember. By the end they looked like pros on rope and were all smiles as we derigged and headed home.

Now back at the camp the girls out at circus class were swinging through the air with the greatest of ease as they worked on their new tricks on the cloud swing and trapeze. Even though they’re out in the middle of the sun it didn’t stop them from working hard pumping up their swings so they could get the best leap or somersault possible each time they threw a trick.

Tonight was had several surprises at dinner (not really). As we were all sitting quietly eating (again…. not really about the sitting quietly, theres over 200 girls in the dinning hall, it was anything BUT quiet!) Anyway, as we were enjoying our BBQ sandwiches and baked beans and waiting patiently for the anticipated dessert of “Brookies” (chocolate chip brownies), all of a sudden the boy counselors from Camp Laney burst into the dinning hall and stole the club leaders and club flags and boxes (again…not really, it was just some of our counselors dressed up as the Laney boys…complete with facial hair and odor!!). As they took the leaders, boxes and flags out you could see the younger campers were already forming a plan to get their leaders and stuff back. Of course as y’all know, you can’t form a rescue mission on an empty stomach so they waited for the brookies to come out before they set off to get them.

Now those Laney boys took the leaders to 3 different parts of the camp, hid them and waited for the longer campers cavalry to arrive. All they had to do to get their leaders back was get 4 campers around the legs of a counselor and then that counselor was out. Once they had all of them “out” they had to release the leader of flag and they girls would come back to the start area and wait for the next clue to head off to the next spot for the next rescue of their flag or box. 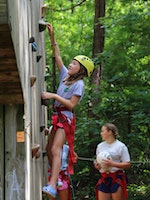 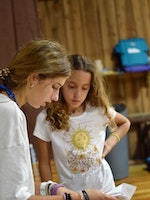 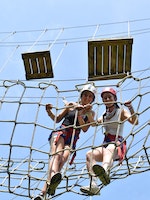 All that sounds pretty simple, right!! Well those boy counselors were armed with stuffed socks and if they tagged or hit one of the campers that was trying to get around their legs, then that camper had to report back to the start location before they could get back in the game. Now that I’ve told ya about the game, let me tell ya HOW the game went!

It was a fierce battle between all the clubs and the counselors as they dodged, dove and slid everyday possible to get to the counselors without being hit by a sock. Some of the younger leaders did a great job of stepping up and forming “waves” of charges into the counselor in an attempt to overcome the barrage of socks that were surly heading their way. You could hear them yelling “1,2,3 CHARGE!!!” all across the mountain as they tried over and over to get there and eventually they all were successful.

I said it was a close battle and I mean it. The final results of thousands of points ended up coming down to just a few individual points to determine the winner. Wanna know who it was?……………….. (ya hear that little drum roll again?)………

Troopers 3rd, Rangers 2nd and again it was the Mighty Mounties for the WIN!!!!!

The Mounties are charging out into a lead for the pants cup thats awarded at the end of the session. Let’s serif they can keep it going or if the Rangers or Troopers mount an impressive comeback to challenge for the cup. Stay tuned!!! 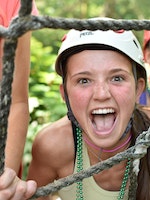 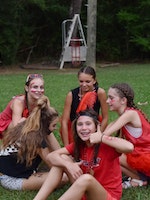 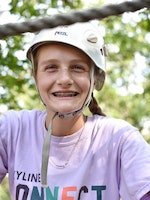 Tonight at campfire the theme was “Humility” and 2 of our counselors spoke to the campers about wearing their “humility” sweat shirt that makes them think and speak a little different than when they don’t have it on. They talked about how we all can wear our humility shirt every day or our lives and just take a minute to think about what we say and how we feel instead of saying what we think at the speed of twitter and regretting it later. What a great lesson in life. I wonder if I could send a video of it to several politicians or people on TV….. just my personal thoughts.

Tomorrow is Christmas eve at camp as we all get ready for the big day on Sunday. Rumor has it theres a cold front headed this was and wouldn’t that be something….just imagine if it snowed on Christmas eve night and all the campers woke to a white Christmas……..it could happen!!

Y’all have a great night and get some rest, you’re almost halfway there and your campers would be so proud of you if you can keep up with them all session!!