Posted by Larry Johnson on July 13 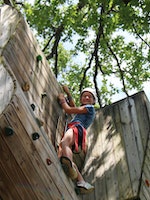 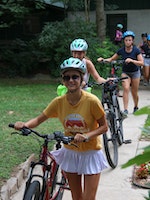 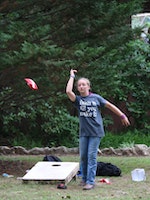 Happy HumpDay Wednesday to ya parents! Yes, its that time of the summer when I have to look at my watch or our fun calendar to know what day it is other than “Dance Night” or “Speed Challenge Night”. It usually happens about this time of the summer every year so thats nothing new. What is new is what was happening up here today. All the girls in tennis competed in our Wimbledon tournament. All of them were wearing white bows in their hairs and there were some pretty good matches going on throughout the day.

Some more “New” news is that the Troopers found the golden horseshoe that’s been hidden in camp the whole session. If all the cabins have good cabin reports on their cleaning, then they will get a clue about every other day to the whereabouts of the horseshoe. They can look for it during their free time but not during their classes. So…… about half way through our second Beli Deli this afternoon, while some campers were enjoying a cool treat, others were turning the grounds upside down in search of the golden horseshoe. All of a sudden I heard a loud shrill scream and then “I found it!!!!”. The sprint was on as all the campers came to see who and more importantly which club that campers was in had made the discovery. It didn’t take long before the crowd around the camp bell ringing it and singing were all noticeable wearing green. Congrats Troopers thats some big points towards the point cup thats awarded at the end of the session.

The ropes course was buzzing today as some of the younger campers got their chance on our V swing today. They had a ball making their way across the 4 elements they had to get through before they made it to the swing. It was all worth it and you can tell from the smiles on their faces as they slid off the platform to the drop of the swing. Its fun to watch these girls broaden their comfort zone and lear to conquer what was previously a fear. I bet tomorrow they do it in half the time and have twice the fun!

While some fo the campers were looking for the horseshoe, others were enjoying the time to just hang out and maybe talk to each other without using a phone and their thumbs (who knew??) Thats one of the benefits of being at camp is “re”learning how to communicate with one another face to face and seeing their reactions on the other persons face when you tell them something. Its a lost art and I’m so glad the girls here get back to the simplest and truest form of communicating. Maybe its something we all need to try these days instead of wanting an over justification at the speed of Twitter?

If you scrolled through the pics you can see there was some communicating down at the waterslide today. And by communicating, I mean screaming! Those girls loved every second of sliding down the slide and then splashing into the cool water of Little River. I gotta admit, its probably one of my favorite ways to get in the river too. Theres nothing like hitting the first bank at a high rate of speed and then sliding up the bank, into the second turn and then the strait away down to the river. Feel like ya just listened to a NASCAR race? Its about the same but without all the equipment and the girls loved it!

Tonight was movie night so each camper came to dinner dressed in their PJ’s and ready to grab a snack from Beli Deli and their own bag of popcorn and just settle in out under the stars to watch “Camp Rock”. The Beli Deli addition is a new thing they session after a camper from last session put in her evaluation that it would be nice if they could get a snack to watch the movie just like when they go to the movies. You know what? She was RIGHT! SO we listened to her and the addition was a huge success. Not only did they enjoy the movie, but almost all of them sang right along with the movie when the songs came on. I could hear them in the office when they were singing. I have no idea how many actually made it through the whole movie without falling asleep out in the cool night air (it really has cooled down tonight). I know i wouldn’t have made it though. It’s just too relaxing out there listening to the crickets and laying back.

Tomorrow will be another full day of activities and my goal is to stop by cooking class to see whats on their menu…. I mean agenda for the day. I’ll let ya know what I find out and how it taste!!

You guys have a great night, I’m gonna follow the trend of the campers that didn’t make it through the movie and head off and get some sleep too. We’ll be back here tomorrow night so come on back and join us to see what all they did. We’ll leave the light on for ya!!

Have a good one, ‘cause like a slow kid in dodgeball…….. I’m outta here!